I haven't posted on my blog in a long time, so, as is my custom, here are some doodles I drew in my notebook to prove that I'm still alive. 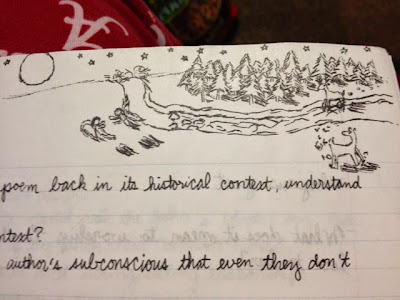 We were talking about John Keats's poem "Ode to Psyche" in class, so I doodle Psyche and Cupid frolicking by a snowy forest.

I don't usually doodle in that class. I was having a hard time focusing that day and was trying to occupy the daydreamy part of my brain so that the other part of my brain could focus on what the professor was saying.

At the end of the class, he voiced his displeasure at the lack of focus in our class that day. I hope he wasn't personally mad at me. I was trying so hard to pay attention.

I have to write a 15 page paper for that class and I'm trying to figure out what to write it about, so I was going through my notes, and that's when I found the doodle. I'm particularly proud of the trees.

NaNoWriMo is limping along. I'm up to 5806 words. I think it'll probably be put mostly on hold until after this paper is done. Thanksgiving break... if only I could fast-forward through the paper-writing process so I can get to Thanksgiving.

But not fast-forward through all the other stuff I'm doing. This semester has gone by really, really quickly. I'm a little shocked.
Posted by Rebecca Mast at 12:06 AM No comments: