Hey, everybody! Now that I've graduated, I'm going to be at home for a little while, applying for jobs and such. One of my current projects is cleaning out my bedroom, and you would not believe the stuff I've been finding. I still have folders of schoolwork from middle school.

Some of things I've been finding are kind of fun, so I thought I'd share a few of them with the world before I send them to rest in a recycling bin.

I was kind of weird and awesome in middle school. I was in a gifted center and had some really good friends, so it was a very friendly environment. I always felt free to be my goofy self, and only rarely did I run into problems with bullies or otherwise mean people (and if people talked about me behind my back, I was blissfully oblivious). So I had a ton of confidence, but I also had no filter. I was always writing stuff without realizing how it would sound to the audience because I DIDN'T CARE WHAT PEOPLE THOUGHT OF ME! I WAS CREATIVE AND SWIMMING AGAINST THE CURRENT! I WAS BEING TRUE TO MYSELF!

Here's a little word of advice, kids: Yes, of course you should be true to yourself and you shouldn't let other people's opinions decide what you do, but if you're going to be writing something, you do need to think about the audience and how they're going to receive what you've written.

My first THROWBACK THURSDAY is a creative writing assignment I did in the first semester of seventh grade. The assignment was called "Creative Comparisons," and the object was to write comparisons without resorting to cliches like "white as a sheet" and "wide as saucers." I believe our teacher gave us a list of adjectives to use.

That's a fairly harmless and innocent assignment. There's not much damage you could do with that, right? I can only imagine Mrs. Spille's face when she read a few of the gems I turned in:

Katrina was as bitter as cocoa powder. She absolutely hated Stella Firestorm for Killing her parents. She refused to ever forgive her.

When John told Lyndzey that he didn't love her, she was as crushed as an egg under a T-rex's foot. She sobbed for days because he broke her heart.

Stella Firestorm was as cruel as a rabid vulture. Because of a tragedy in her childhood, the evil sorceress made the lives of all good people miserable.

When Katrina switched bodies with Stanley, she realized that his skin was as tough as leather. She found that she could run a sheet of paper over her fingers and not get a paper cut.

Katrina soon found that her future self was as wise as an old philosopher who had traveled the world. Older Katrina knew all the rules and tricks of magic, and she was an experienced fighter.

I had a bad habit of using characters from my personal writing projects in my creative writing exercises. They were also melodramatic, steeped in strange fantasy, and typically engaged in a fierce battle to the death. Mrs. Spille always wrote lovely comments on my assignments, but I know she must've been at least a little taken aback every time I spiraled off into weirdness.

I read a lot of Harry Potter and Redwall books when I was a kid. You might say they influenced my writing a bit.

Posted by Rebecca Mast at 12:40 PM No comments:

Okay, just kidding. I found the Photoshop Elements 12 disc. I found the serial number. I re-installed it. It still doesn't work.

I might try to fight with it. But not tonight. Tomorrow, perhaps.

Tonight I am just sad.
Posted by Rebecca Mast at 9:34 PM No comments:

THE DISC HAS BEEN FOUND!

WE FOUND MY PHOTOSHOP ELEMENTS DISC!

A while back, I wrote a post about not being able to find my Photoshop Elements 12 disc and how that was a problem because the file had gotten messed up on my computer and I needed the disc to re-install it. I've been searching for that thing for months.

Well, tonight my mom came into my room to chat with me, and she started looking through a pile of random papers, and she found the disc!

Inside a Valentine's Day card.

Yeah. That's weird even for me.

But I AM SO HAPPY!!!!!!!!!!! I'm installing it right now. I almost had a problem because I couldn't find my serial number, but luckily for me, Adobe keeps a list of all your products and their serial numbers on your Adobe account page. HOORAY!

THERE WILL BE CARTOONS! AND OTHER FUN!
Posted by Rebecca Mast at 8:57 PM No comments: 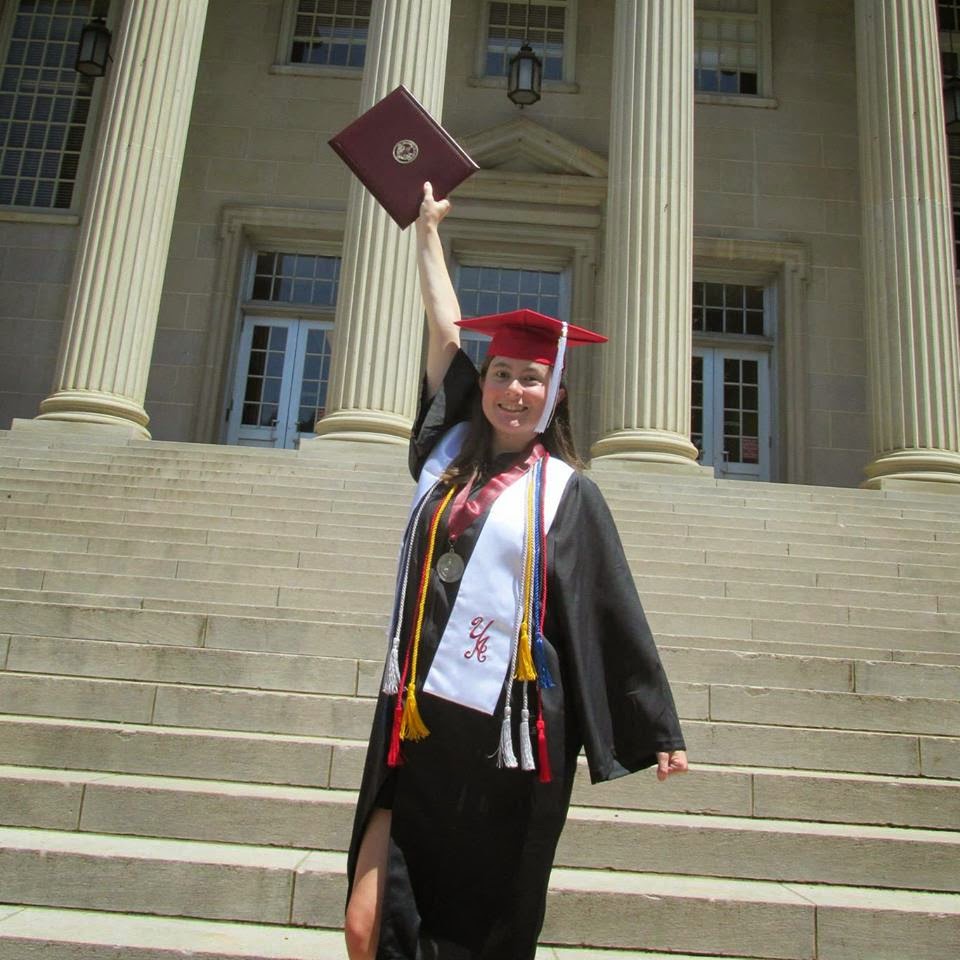 On May 2, 2015, I graduated from the University of Alabama. For four years I studied literature, creative writing, and French, all the while chasing that elusive red hat that designates a 4.0 GPA. It all paid off when I walked across that stage and heard the words "summa cum laude" announced after my name. I still can't believe it. These past four years have been absolutely incredible. I've performed around the country with the Million Dollar Band, studied abroad in France and Ireland, and interned with three different publications. I've met so many different people and made some awesome friends. There are truly no words to describe how amazed and grateful I am as I look back on my undergraduate years. Thanks to God, my family, and my friends for getting me through the long nights of writing papers. Special shoutout to Gorgas Library for letting me stay there late at night and providing quiet spaces and caffeinated beverages. Finally, congratulations to all my fellow graduates! We did it, y'all!!! Roll Tide Forever!
Posted by Rebecca Mast at 10:57 PM No comments: