I just updated my iPhone, and I'm enjoying it so far (although the keyboard looks a little different and it's messing with my eyes).
My first order of business was to test out the new drawing feature on the Notes app. 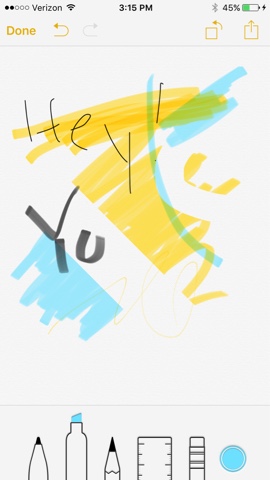 For a mobile app that lets you draw with your finger, it's surprisingly sophisticated. Look, it even has a ruler so you can draw straight lines.
I don't think I'll ever be bored again.
Posted by Rebecca Mast at 3:20 PM No comments:

October is a month full of excitement for many reasons. Some people enjoy the cooling temperatures, some people like the reappearance of Pumpkin Spice Lattes at Starbucks, and some people enjoy dressing up and decorating for Halloween. But there's another thing about October that I'm excited for.

October is the month before November.

NaNoWriMo, also known as National Novel Writing Month, is a challenge issued to writers around the world to write a novel of 50,000 words between November 1 and November 30. It's a way to motivate yourself to finally sit down and write that novel that's been knocking around in your head. For more information, check out this link or go to nanowrimo.org.

I've never actually "won" NaNoWriMo. I've had a ton of fun participating, but November was always such a busy month for me during college. My novel had to compete with homework, essays, holidays, football games, and rapidly-approaching final exams for my attention, and it just never went over well. I think my all-time record was around 12,000 words.

This year will be different! This year I won't be in school, so I'll have more time to write the heck out of this novel. I'm going to cheat just a little bit this year-- I'm going to be working on a novel I've already started. Instead of writing a 50,000-word novel, I'm going to add 50,000 words to my current project. Yeah, that's not exactly how it's supposed to work, but there are no NaNoWriMo police that are going to come after me, and it's still in the spirit of the event.

I'll be working on the same novel I tried to start last year. This summer, I took what I had written previously and totally rewrote it, using the first draft as a road map. The beginning of my novel is a lot more detailed now. A character who once just had a passing mention is now fleshed-out and fantastic, and he made one of my best friends almost cry, which is a good sign! I'm a lot happier with this beginning. I think I'll have a much easier time moving forward into the project now that I've gotten a better start. Just for funsies, I'll mention that my current word count is 9547 words, not counting the various bits scribbled onto recycled printer paper that are in my to-be-typed file.

The 2015 edition of NaNoWriMo's website just launched, and I went and entered my "new" novel information. I also got a 2015 word count gadget and stuck in the sidebar of my blog. I can't start tracking my word count until November 1, so the tracker is going to be at 0 words for a while. That's normal! Don't tease me, okay?

Posted by Rebecca Mast at 11:29 PM No comments: