I have really, really weird dreams. They're very vivid and detailed, and I can usually remember them pretty well when I wake up. It's a side effect of a medication I take. It's as though the old director of my dream movies got fired and replaced by a really eccentric, artistic, hyperactive director who can't figure out how to make dreams stunning and entertaining without stressing me out and making me feel tired when I wake up.

I remember when I was studying French in high school, my classmates used to get so excited when we had dreams in which we spoke French, because that meant the language was really sinking into our brains. It was a momentous occasion when someone burst into the classroom and shouted, "I GOT MY FRENCH DREAM!"

I remember my first "French dream." I was practicing saying "Je voudrais un croissant, s'il vous plaît" (I would like a croissant, please) over and over because I wanted to order a croissant at the France pavilion at Epcot.

Now my French dreams are a lot more insane. They consist of me going BLAH BLAH BLAH in complete sentences while I run around strange, cobblestone streets in Paris or Tours, having weird adventures in some kind of study abroad program.

And by "pretty dang well," I mean I hit some of the notes. I was well aware that I was nowhere near as good as the other trombone players around me.

The dream was just so absurd that I had to doodle it. This is the first art I've made using Krita on my new laptop, and I was playing around with a few interesting brushes.

While I was drawing, I thought to myself, "You know, I really have no idea what a trombone is supposed to look like. Maybe I should look at a photo online for reference."

And then I thought to myself, "If I can't picture what a trombone looks like now when I'm awake, there's no way my dream self was holding anything remotely resembling a trombone." So I just went with it. 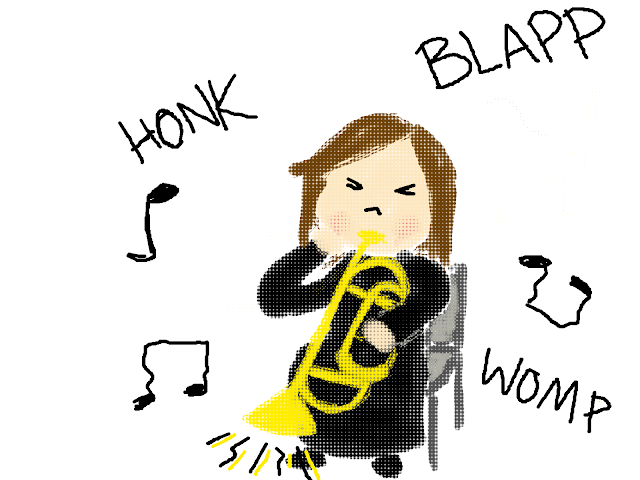 Posted by Rebecca Mast at 10:21 AM No comments:

Face: Hey, I got those notes you sent about appearances for the new month, and I was wondering if you'd be open to some suggestions.

Me: Well, I suppose I could think about it. What did you have in mind?

Face: Well, first of all, I can't get rid of the bags under the eyes. We're under contract with Insomnia and Electronic Media. I could try to soak up a little sunlight, go a little tanner, you know- reduce the contrast a little.

Me: *sigh* Fair enough. What else?

Face: Well, you said you'd like to go for smooth, consistently-colored skin again, and I was just thinking... isn't that a little boring?

Me: What do you mean?

Face: Well, think about it! Everybody wants skin like that, and so many people either have it or use makeup to make it look that way. Why don't we try something a little different?

Face: Hear me out! It would be a bit modern, a little abstract- We can get some red shading in places, and then we'll go for a 3-D effect with some pink, and red, and- just wait, you're going to love this- WHITE!

Face: No, it'll be okay! I'll sprinkle some little dark spots around your nose, chin, and forehead. I think it'll really enrich the color palette.

Me: NO, NO, NO, NO. NO PIMPLES. NO BLACKHEADS. NO WHITEHEADS. THIS IS NOT UP FOR DEBATE!

I GOT A NEW LAPTOP

Hello, ladies and gentlebloggers! I have fantastic news- I recently bought myself a new laptop, and it arrived this evening! I may or may not have completely forgotten about going to karate in my excitement.

It's a Dell Inspiron 15 5000 series 2-in-1, so I can flip the lid all the way back and turn it into a tablet. A rather large tablet, mind you, but here's the awesome thing-

The laptop came with a free trial of Autodesk SketchBook, which I used to create this lovely quick sketch fox: 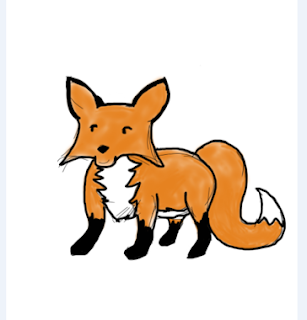 (I had to take a screenshot... I don't think the free trial has a way to export photos as anything other than a TIF, and Blogger doesn't like those)

It was pretty neat! It's a bit different from my Wacom Bamboo Splash tablet, which didn't have a screen of its own. I'm looking forward to getting a better stylus to work with.

This laptop is also pretty great for reading comic books online. I usually use my Marvel Unlimited app to read comics on my iPhone, but the screen is kind of small. My laptop screen is anything BUT small. One could say that the digital comics I'm reading are larger than life. Because they are. They are literally bigger than actual comic books.

I'm still getting used to Windows 10 and my new hardware, but I'm pretty psyched about my new laptop so far!
Posted by Rebecca Mast at 10:19 PM No comments: