I'm only about halfway through the journal, too. I sort of can't wait to see how it looks when I'm done with it.

I tore out this page, put it in the pocket of a pair of jeans, and ran the jeans through a complete wash and dry. It's sorta crinkly and stiff now. It looks really messy and I just love it. 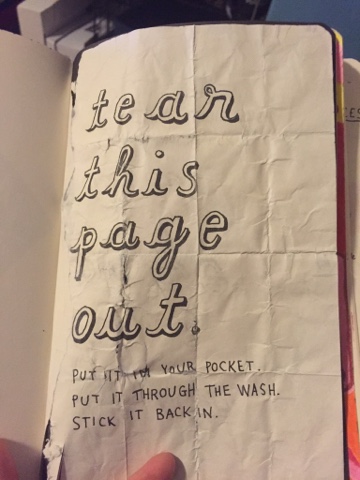 My journal isn't in very good shape after being dropped off the top of a parking garage and rolled down a hill. Only one page has fallen out so far, though. 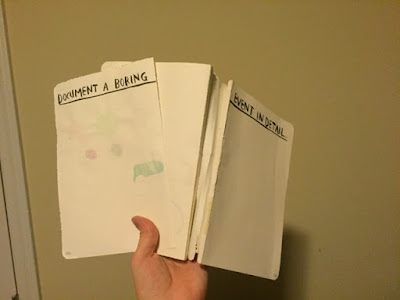 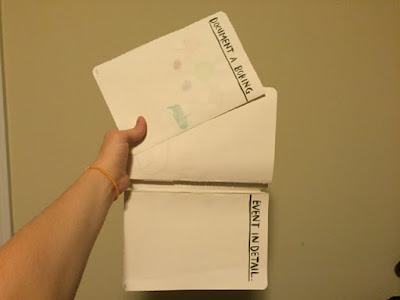 Posted by Rebecca Mast at 2:20 PM No comments:

Email ThisBlogThis!Share to TwitterShare to FacebookShare to Pinterest
Labels: keri smith, put it in your pocket, put it through the wash, stick it back in, tear this page out, wreck this journal

One of the pages of Keri Smith's Wreck This Journal instructs the reader/wrecker to climb up high and then drop the journal.

Not long before I graduated, I climbed to the top of a parking garage near my dorm and did just that.

This was the highest place I could find on campus where I could safely drop the journal. It didn't do much in the way of aerial acrobatics, but it did hit the ground so hard that the spine split apart. Now the book is held together essentially by a piece of paper and some glue. Well, it's not called Keep This Journal In Perfect Condition, now, is it?
Posted by Rebecca Mast at 8:25 PM No comments:

Wreck This Journal: Connecting the Dots 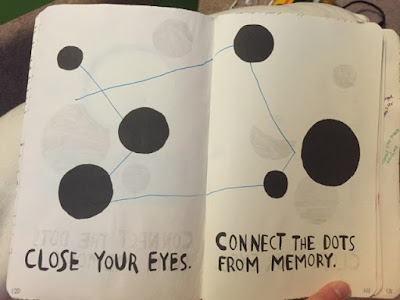 It's been a while since I posted about my Wreck This Journal, and the reason is that I did some really cool stuff with it and got video of it, but I've been having issues formatting/editing/whatever the videos and got sidetracked. I'll be revisiting that particular project in the next day or two.

In the meantime, here's the photo of me connecting dots with my eyes closed! I actually did pretty well. I went over the path I would take a few times, tracing through the air with my pen. Then I shut my eyes and did it for real, and I did a lot better than I thought I would!
Posted by Rebecca Mast at 1:30 PM No comments:

Today I was working in the freezing part of the museum I work at, so I decided to eat my lunch outside to warm up. As I was munching away at my Goldfish underneath a large rocket model, I noticed something rather large making its slow way across the pavement toward me. 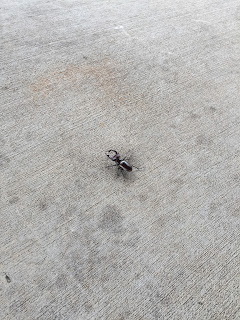 I'd never seen an insect like this before-- not in person, anyway. That's the kind of thing I normally shudder at when it appears on Animal Planet. I'm not a huge fan of insects, but this little dude wasn't trying to hurt anyone. He was on a mission, and he was quite intent on completing it. He went completely still every time a person walked by him, but he never seemed to become hostile or agitated. He just went on his merry way.

I watched him for about half of my lunch break.

At one point he reached the edge of the shade. He wiggled out onto the brightly lit pavement, then immediately turned around and went right back into the shade. Like almost everybody else today, he felt that hot Alabama sun and said "NOPE."

My large insect friend didn't seem interested in climbing anything while I was watching him, but after I went back inside, I could see him climbing up the rocket model.

My dad and I did a little research after I got home from work to try to classify the insect, and we concluded that it was a Giant Stag Beetle. We used this website. I'm definitely not a scientist, though, so if anyone out there has a different opinion, I'd love to see it.
Posted by Rebecca Mast at 10:55 PM No comments:

Throwback Thursday to a time when I wasn't afraid to draw people in profile but probably should've been.

(I didn't have access to a scanner tonight, so I'm afraid this is the best quality I've got, but the text is provided for you beneath the image!) 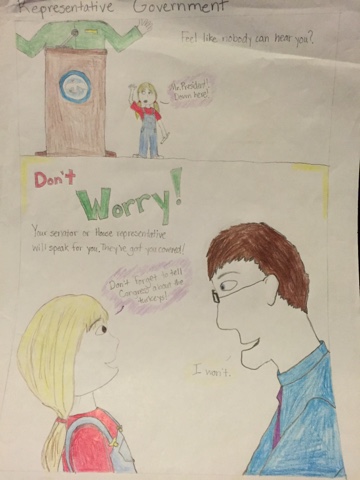 This text is centered.

Poster Text: Don't Worry! Your senator or House representative will speak for you. They've got you covered!

Little Girl: Don't forget to tell Congress about the turkeys!

I did a lot of artsy projects in middle school. The teachers were all into having us illustrate concepts, reenact historical debates, chart emotional highs and lows in stories, write songs about government styles... all kinds of crazy stuff. It was AWESOME. I loved to draw back then, too.

This was for my 8th grade Civics and Economics class. It was a pretty fun class. There were LOTS of crazy projects. For example, I had my first adventures with Apple's iMovie in Civics. The first project I did was a short documentary about the life of Ronald Reagan, using the biography I was assigned to read over the summer as the main source of information. Luckily for me, I decided to do Reagan instead of my first idea, Ulysses S. Grant, which was shaping up to be quite a dull project. The other project was a ten-minute documentary for National History Day about the life and tragic death of Jonathan Larson, the writer and composer of Rent. My partner and I spent some stressed-out hours in the computer lab for that project, but it did pretty well grade-wise and in the regional competition.

Comics were much more common assignments than the documentaries or other crazy stuff were. If you think about it, making a comic was a pretty tame assignment compared to some of things we did. I definitely had a lot of fun doing them, though, and sometimes I spent way too much time working on them.

The first time I can remember drawing a comic for homework was in 6th grade for either health or science class. Those were my first forays into sequential art. Since then, I've learned to a few things. As you'll see when I get my next Civics comic to the scanner, I've gotten much better at arranging panels. I also draw human faces better (usually. if I put in effort). Unfortunately, I still can't draw in faces in profile, but I can at least recognize a few things I was doing wrong back in the day. As for bodies, well... To be honest, I'm pretty impressed with how I drew the little girl in the comic. It's been a long time since I've drawn a human body I truly liked. Maybe I'm overcomplicating nowadays. Or maybe I just need to draw nothing but children.

Posted by Rebecca Mast at 11:31 PM No comments: