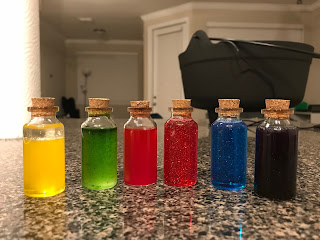 I'm getting ready for Halloween!

I'm going to a Halloween murder mystery party this week. The character I've been assigned is a sorceress who's an expert at making potions. The costume suggestion notes suggested I bring "samples" of my potions to show the other party guests, and I thought, "Hey! That sounds fun!"

It was, indeed, fun. It was also kind of a mess. 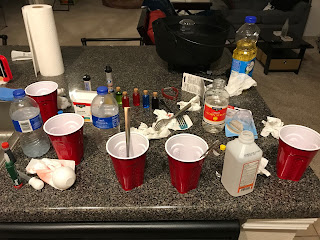 I had a handful of the materials at home, but I bought most of them from my local Dollar General Market. I bought food coloring, glitter, corn syrup, rubbing alcohol, a medicine dropper and baby snot sucker combo pack, and Krazy Glue for under $20.

I didn't go in with much of a plan. I was hoping to find glycerin, but they didn't have any. I saw corn syrup and thought, "Hmm, that is also colorless, thick, and sticky. Worth a shot." Corn syrup, as I should have realized earlier, since it's basically sugar, dissolves in water. That was bad news for my hopes of creating stratified layers of liquid, but it was very, veeery good news for my cleanup attempts. It absorbs food coloring very well and is excellent at keeping glitter suspended throughout it.

I also didn't originally intend to buy a baby snot sucker (apparently it's called an aspirator, but "baby snot sucker" is more fun to say). I wanted a dropper of some sort, and the only one I could find came in a package with the baby snot sucker. The package was inexpensive, so I reasoned that I could throw away the snot sucker without hurting my feelings (or my wallet) too badly. Luckily for me, I tried using the snot sucker to transfer liquids into my bottles. It turned out to be WAY better for working with corn syrup than the medicine dropper was.

Once again, I didn't have much of a plan going in. I mixed stuff together in red Solo cups, using such scientific measurements as "smidges" and "bits." Some things turned out cool enough to preserve in bottles. Others went down the sink. Within ten seconds of opening a glitter tube, I spilled glitter on the counter and started regretting everything (I probably owe my roommate an apology).

The bottles seem to be working pretty well so far. I found them on Amazon by searching for "potion bottles." The package arrived on my doorstep looking kind of beat up, and the box inside was squished and spilling open, but not a single one of the 18 bottles was broken. I was highly impressed. The corks seem to fit pretty snugly in the bottles, but the reviewers online warned that they wouldn't stay watertight, so I applied Krazy Glue to the corks before sealing the bottles. Hopefully that'll help. If not, I'll have a bag full of sticky, glittery goo.

It was a delightful way to spend an evening! If I have the time and energy, maybe I'll concoct a few more potions before the party this weekend, although I honestly don't think I will. I'm not sure what to do with the 12 bottles left over. Maybe I'll get a head start on Halloween for next year.
Posted by Rebecca Mast at 11:28 PM 2 comments: