I Made a Teeny, Tiny 8-bit Man

Tonight I went to the library to play around with Photoshop. I used an online tutorial to make this 8-bit dude:

The idea was to learn how to draw 8-bit characters to make a poster for a big event the chapbook press I'm interning with is hosting, but I've learned that this is actually harder than the tutorial makes it sound, and I would have to practice quite a bit before I was ready to make something good enough to put on a poster.

Here's the tutorial I was using: http://blog.learntoprogram.tv/pixel-art-with-photoshop-part-1/

He's very tiny because I was following the instructions on the tutorial almost to the letter, and the tutorial was designed for people who want to make sprites for video games on platforms that prefer smaller graphics. The tutorial did give a method for making the image larger, though. I tried it, but I had to fix a few things that got distorted during the transformation. Not sure I got them all, but here it is: 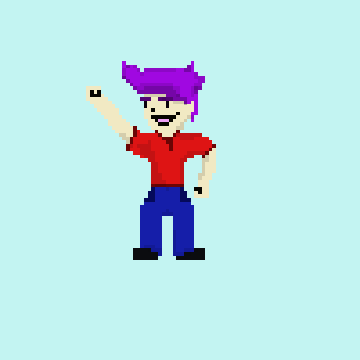 I think it looks better small. But... oh well! I had fun and I learned something new.