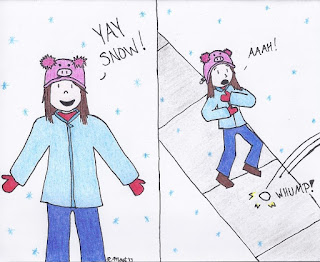 You might recall a few very depressed blog posts about the week or so when it wouldn't stop raining. For the first few days, the rain was tolerable. But then it got colder and colder and everyone was miserable.

And then it got so cold that the rain turned to snow.

I live in the Deep South- we're lucky if we get one good snowfall a year. Everyone on campus was excited about the fat, fluffy flakes that were falling to the ground and actually sticking. Of course, the Powers That Be waited to cancel classes until mid-afternoon when the snow had stopped falling anyway, but at least we got to walk to our classes through a winter wonderland.

I was unaware of this at the time because I was in French class, but a battle of epic proportions went down on the quad that day. Students came from all corners of campus and flung snowballs at each other. They hit their friends. They hit strangers. They hit random passersby. They probably hit their professors, too. Anybody on campus was a target. At least one football player was hit by a snowball. The battle spilled out onto other areas of campus, turning the school grounds into a battlefield.

Like I said, I missed out on the campus-wide snow war. I was in French. When I finally got out of class, the snow had just about stopped and was even beginning to melt. I ran back to my dorm to change into some warmer clothes and then I set out for a nice, long walk around campus, determined to enjoy the snowy landscape while I could. I walked up the sidewalk toward the center of campus, feeling happy to be alive.

A snowball came flying out of nowhere and crashed into the sidewalk at my feet. I froze mid-step, looking around wildly to see who had thrown a snowball at me. I didn't see anybody I knew, just a bunch of strangers walking by and smirking. I laughed it off and walked on as if I had not a care in the world. But I was actually very confused.
Posted by Rebecca Mast at 6:09 PM