A Tale Of Two Hotel Rooms

It's usually a building of various size filled with lots of smaller rooms. The rooms are more or less uniform in size and decor. They have bathrooms and often have little plastic buckets with which you can get ice from a nearby ice machine. There are often multiple elevators and stairs which are used only by marching band members who are fed up with the long lines for the elevators.

...I don't know what an average French hotel room is.

See, every French hotel room I've ever stayed in has been dramatically different. Some of them were rather like American hotel rooms in that the rooms were pretty uniform in size and decor. However, other hotels (especially the ones I've seen in Paris) have rooms that are radically different from one another. I have my suspicions that many of these hotels were built as something else first and then converted into hotels, and the owner made use of every inch (centimeter?) of space.

For example, take one of the hotel rooms I stayed in while I visited Paris in high school. We climbed up I-don't-know-how-many flights of stairs only to open our room door and find another flight of stairs. Yes, there were stairs inside our personal hotel room. That room was cool, though- we called it the "penthouse." It had its own balcony and everything.

The hotel room I'm staying in right now is probably the most bizarre room I've ever seen. Take a look. 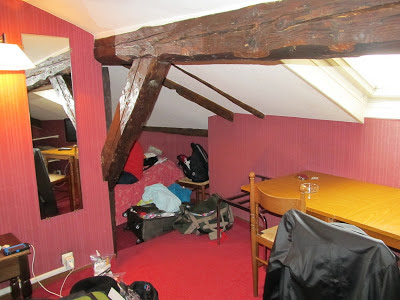 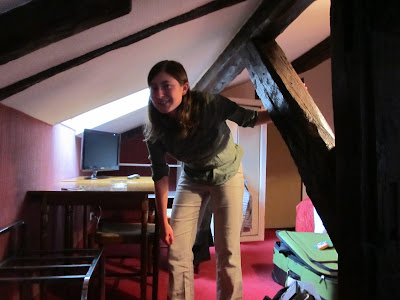 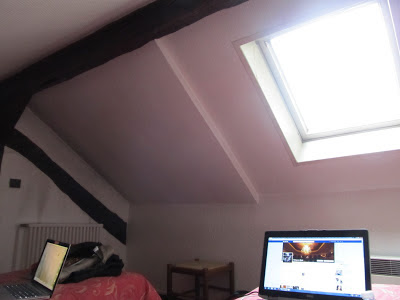 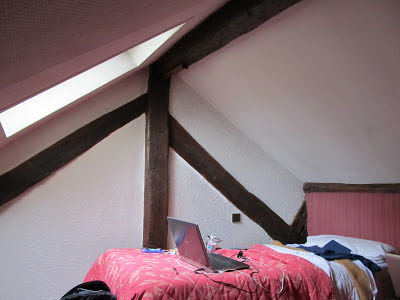 You have to stoop in order to get to the other half of the room. The bathroom door gets caught on a roof beam. We have skylights. The roof is all slanty.

Our room doesn't bother us too much because we're young and able-bodied and all that. We just think it's kinda funny. Although I could see how a handicapped person would have some serious issues with this room and with this hotel in general. You have to bend down and take a step down in order to get to two of the beds. The only elevator is big enough to fit one skinny person and one suitcase. The bathrooms are tiny.

So here's a Travel Tip From Rebecca: If you have a disability and you want to stay in a hotel in Paris, call the hotel and make sure it fits your needs before you make a reservation. I've noticed that Paris itself isn't always very friendly to those with handicaps. Many of the stairs are winding and narrow, and there's a serious lack of elevators, which is unfortunate because the restrooms are often located downstairs or underground. There are a ton of cobblestone walkways as well (although I've seen many French children riding scooters on them, so perhaps a wheelchair would be just fine).

I started this blog entry this morning but had to break off to go to a play. We went to see Phèdre at the Comédie Française  There I found a entirely new definition of "nosebleed section" -- way up high in a barstool-height chair with my knees against a wall and a seat that was so small I worried about slipping out of it. The actors were quite good, but I had a miserable time. You see, during the play I started to feel unwell and got up so I could slip out of the theatre. However, at the Comédie Française they lock the doors during performances. They don't keep someone nearby to open the doors and I never saw an usher in the entire theatre. So I had to go back to my chair and suffer in silence for the next two hours.

After the play, we went to Montmartre, which is sort of the artists' district of Paris. I was feeling much better by the time we got there, which was fortunate because Montmartre is one of my favorite places in all of France. We saw the Moulin Rouge, discussed the idea of going to see a performance there, and ultimately decided against it. Then we climbed up the many, many steps to get to Sacré Coeur, an absolutely gorgeous basilica. It was one of my favorite sites last time I came to Paris and it still is now. There is nonstop prayer at Sacré Coeur, so night or day you can go in and worship. While I was walking around today, some nuns were singing and leading prayers. It was fantastic to experience that. There's just something about the way hymns echo off the walls and ceilings of a great stone sanctuary that makes shivers go down my spine.

Some friends and I found a piano bar restaurant for dinner. I could have sat there and listened to the piano all night. It was just so pleasant. Usually in French restaurants, the waiters don't bring you your bill until you ask for it, so we just sat for a while after we finished eating and enjoyed the atmosphere. I had a glass of wine with dinner, just for the heck of it. It wasn't bad, but I think I'll try something white next time.

Perhaps the most heartbreaking part of this day was when I ran out of cash and couldn't buy a crepe after dinner because the store would only accept credit cards for purchases 12 euros or over. Quel dommage.

Here are a few pictures of today's adventures: 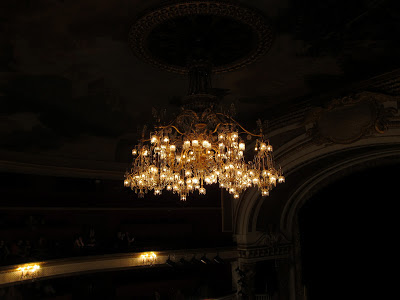 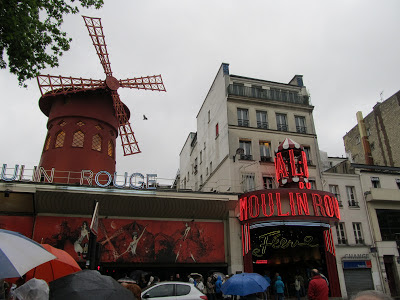 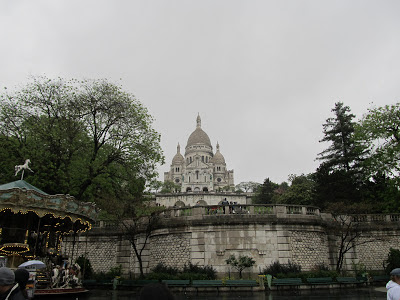 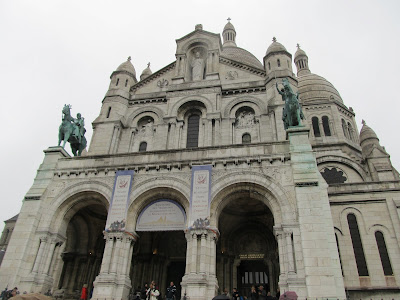