Two iPhones Walk Into A Bar...

This is just a sketchy comic that I thought ended up being kinda funny. It was written sort of as one long strip across a sheet of paper, but I don't currently have access to a scanner and it was too wide for my iPhone camera, so I split it up. You'll need to click on the images to read it. And even then you might not be able to, so I'll write out the dialogue underneath. Just in case. 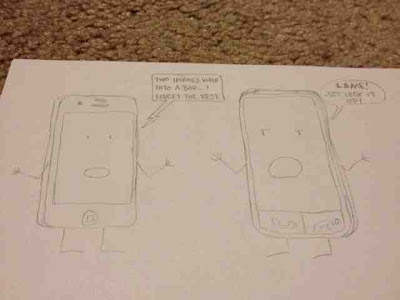 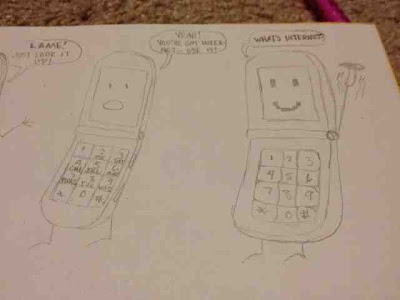 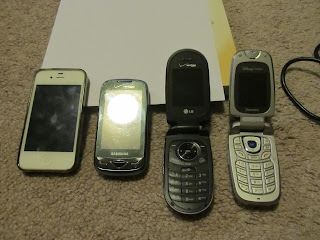 These are all the cell phones I've had in my lifetime. My iPhone, Samsung Reality, LG brand phone whose model never had a catchy name, and... the Disney Mobile phone. Did you know that Disney once had its own line of cell phones and service? It did. It didn't last very long.

I had a Disney mobile phone. It was my first cell phone, and I was completely in love with it. These were the first cell phones my family ever had that had a color display. It came with "Bare Necessities" and "Hawaiian Roller Coaster Ride" as ringtones, and I bought the Pink Panther theme to be another one. My parents liked it because we could send special text messages called Family Alerts to each other for free. I got the phone in eighth grade and kept it for about a year until Disney Mobile gave up the ghost and we had to switch to Verizon.

I got another flip phone. I remember at the time I really wanted a Razr, but I was talked out of it for some reason or other. Man, talking about this makes me feel old... and it really wasn't even that long ago. We had four identical phones in the house, so we got our phones mixed up a lot. At one point we were able to tell whose phone was whose by seeing if it was broken at the hinge. I think every single one of our phones broke that way eventually.

My next phone was awesome. It was the Samsung Reality. It had a touch screen, a slide-out QWERTY keypad, a doodle pad, conversation-style text message view, and it could go to the Internet. Awesome phone, and awesome for texting. If I hit a point in my life at which I am no longer able to afford a smartphone, I'll go back to something like this. I became very, very fond of this phone. It got me through the end of junior year and senior year of high school as well as my freshman year of college. The only reason I upgraded was that it couldn't quite do all the things a smartphone can.

Just before the start of my sophomore year of college, something miraculous happened. Something I'd been wishing for since eighth grade but with no hopes of ever actually getting it. My parents got me an iPhone. I don't have to tell you about iPhones. They're pretty cool. I got a white iPhone 4S just a few short months before they came out with the iPhone 5. And you know what? I don't even care! My phone is awesome. So there.

Cell phones have changed a lot in a relatively short period of time. My little cell phone time line spans seven years- and look how much has changed!

I got into a habit of naming my cell phones over the years. From earliest to latest, their names are Flippy McFlipperflip, Buttons McButtonbutton, Touché McTouchemoi, and... Well, I never actually named my iPhone. For all intents and purposes, let's just call it Siri.

But really... Quit avoiding the question, Siri. You're capable of doing Internet searches. Why don't you just look up the end of that joke?
Posted by Rebecca Mast at 1:20 AM