"The Attack on the Mill" Abridged 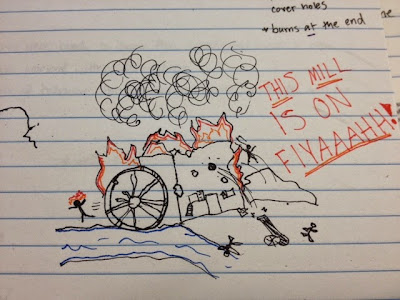 I guess this is just a thing I do now. I abridge works of literature by drawing (sometimes quite insensitive) cartoons of them.

Anyway, this is a cartoon of the last part of Emile Zola's The Attack on the Mill, also known by its original title, L'Attaque du moulin. I read it in French, and then I wrote a paper about it.

So when I was goofing around and talking about how my life was The Legend of Zola? This is it.

THIS... is The Legend of Zola.

Apparently I've just finished the dungeon in which I write the first draft and give it to a classmate to review. It was pretty hard, I won't lie. I died at the beginning once and had to start almost all the way over-- didn't collect enough concentration and inspiration crystals to survive the Distractoids. But along the way, I found a cool Caffeine Potion which I think really helped me get through.

Uh... spoiler alert? The mill burns at the end?

I realize that this cartoon is probably in bad taste, but I'm afraid that's just the state of mind I'm in right now. I'm sorry if you're offended. You can address your hate mail to the comments box below.