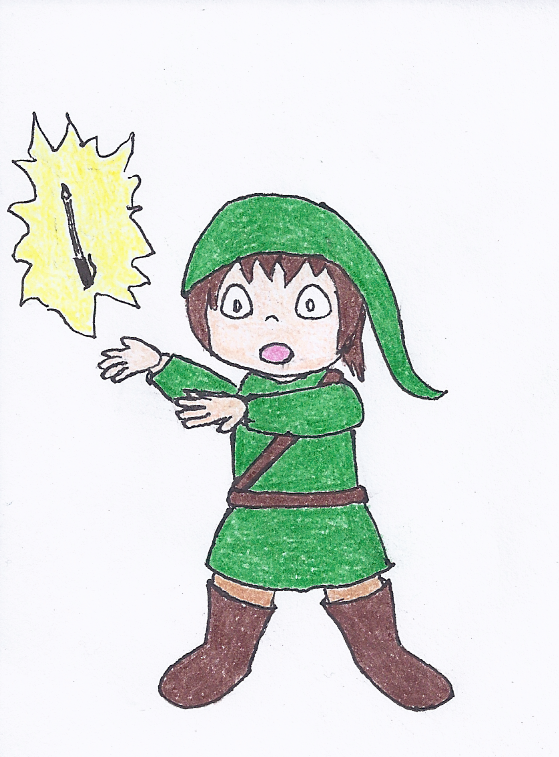 I've been poking around in the Legend of Zelda franchise lately (because I need just one more distraction in my life), and I found that I actually really like it. I considered buying Skyward Sword, but then I realized you have to buy the Wii Motion Plus thing as well, and when you consider the amount of time in my life that I actually have access to a Wii, it's really not worth it.

So instead I just watched Let's Play videos and daydreamed about what my life would be like if it were a video game like Legend of Zelda.

It would probably be the most boring video game ever. Instead of a sword, I'd probably have a pen. A really super-cool awesome pen. The Master Pen. It sounds pretty neat.

But then I'd just go around correcting typos and writing papers. The people standing around would remind me which controls to use to write a good thesis statement. The boss battles would be giant literature anthologies out of which I'd have to cut pieces of evidence, which I would then synthesize to form a strong argument.

A game like that might actually be kinda fun for English majors. But since the majority of the people in the world are not English majors, The Legend of Rebecca would completely tank.

Wait, if I'm the main character, then I can't have my name in the title. Hmmm...

The Legend of Hemingway.

Maybe it's just me, but that title sounds kind of badass.

I could make a different game for every writer I study.

For instance, right now I'd be playing The Legend of Zola.

Zola actually kind of sounds like Zelda, so that's EVEN BETTER!!!!

THE LEGEND OF ZOLA: coming soon never to a store near you!