So I've got this laptop. It's a Dell. Say whatever you want- I really like Dell laptops. My very first personal laptop was a Dell. I got it when I was in sixth grade, I believe, and it was a hand-me-down-- already a few years old. It didn't even have a functional battery. I had to keep it plugged into the wall. But that laptop was pure gold in my eyes. I wrote my first novel on that hunk o' junk-- the first draft was sixty pages! I haven't written anything that long since. I have a feeling that that laptop didn't connect to the Internet... not sure, but if it didn't, then that probably had something to do with the success of my lengthy writing project.

...where the heck am I going with this? Ah, yes. I like Dells. I've been using Dell laptops for almost half my life and you're not going to convince me that they're bad, so save your breath/typing muscles. (People often disagree with my choice in laptop brand. I'm a little sensitive.)

Anyway. I've got this laptop. It's a Dell. I actually got this laptop free from my university as a part of a hefty scholarship package. So I guess it wasn't free as much as I paid for it with my blood, sweat, tears, and the surrender of my social life in high school. It isn't the fanciest thing in the world, but it's pretty close. A very adequate piece of machinery. Been using it for two years and it hasn't let me down.

I've taken that laptop and its charger cord (which I have recently learned is actually called a power adapter-- thanks, Dad) all over creation. Back and forth to the library, across campus, on car trips, through airport security and on airplanes, and to Europe. It has survived amazingly well.

However, on Monday morning I packed up my laptop and brought it to class with me, planning to sit in the library to recharge it while I worked on something. That didn't end up happening, so I just went home. That evening, as the battery dropped down to the yellow-blinky-light level, I pulled out the power adapter and plugged it in.

The laptop did not start charging.

I checked everything. I made sure the power outlet was turned on, the power converter and plug were securely plugged in, the parts of the adapter were firmly put together, the battery wasn't loose... I even pulled out the battery and blew into its socket-thingy to get rid of any dust. I mean, if it works for video games, why not? But nothing worked.

Luckily, one of the guys in my group has the same scholarship and therefore the same laptop as I do. I plugged in my laptop using his power adapter, and the laptop began to charge. From this I deduced that the problem was the power adapter and not the battery. At first I thought this was excellent, since I could simply buy another power adapter and use the other guy's adapter until I got one. But today I realized that, if it were the battery that weren't working, I would probably be able to use my laptop as long as I kept it plugged into the wall (like my very first laptop), with no need to constantly borrow the other guy's charger. Pros and cons to each situation, I guess.

So that's why there haven't been a lot of blog posts lately. I'm trying to use my laptop as little as possible so that I can make the battery last as long as possible between visits to the guys' apartment to borrow an adapter. As a matter of fact, I am writing this blog post from a computer in the university's library. And just to add insult to injury, this keyboard is weird. It's a QWERTY keyboard, not like the AZERTY keyboards in France that were just impossible to type on, but there are just enough differences that it's making it difficult to type. I don't know if this is a typical Ireland/England keyboard or what, but the @ symbol and # symbol are in different places, the shift key is tiny and I keep accidentally hitting Caps Lock instead, and the enter key... You know how on Guitar Hero the orange key is really hard to hit because you have to stretch your pinky out super far? Yeah, that's about what I'm dealing with here. 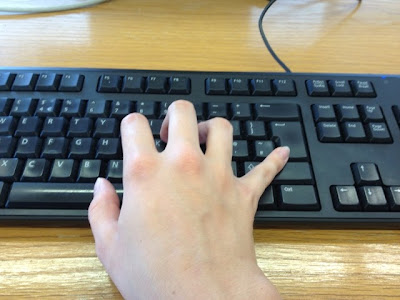 I've got a couple of great blog posts lined up. I just need to be able to write them. The school computers aren't letting me upload pictures, so I'm going to have to go back and forth between the computer and my iPhone app a bit. Hopefully this will all work out!
Posted by Rebecca Mast at 10:24 AM