Once upon a time I mentioned the Blogger app in a post and I feel like I was a little critical of it. That was just the charter bus frustration talking, you guys. The Blogger app is fantastic. I don't like to use it for longer blog posts 'cause-- hey, who likes typing essays with their thumbs? But I find it's the easiest way to put the photos I take with my iPhone on my blog, and it really does work quite well for me. So if you use Blogger and you have an iPhone, go get the app! It's free and it really does come in handy!

I'm not getting paid to say that, I swear. I'm just eternally grateful for the app since I've had limited use of my laptop lately. I can hear you all saying it now: Rebecca, when are you going to quit complaining about your laptop charger and go buy a new one? I will, I will! ...eventually. Probably sooner rather than later, because I need my laptop to write a few papers in the next week or so.

Anyway- back to the topic of my weekend excursion!

I went to the Aran Islands this weekend. Specifically, I went to one of the Aran Islands -  Inis Mór. We left the university on a double-decker bus (yeah, I thought they only had those in England, too) and drove to the ferry. After... I don't know, an hour? on the ferry, we arrived on the island. The first place we visited was a bike rental place, where every single one of us hopped on a bike. Then we rode around three and a half miles to a visitor center-type area with a few shops and a cafe.

That was probably the best bike ride of my life. It wasn't too hot and the hills weren't too bad, and the scenery was absolutely gorgeous. When people say Ireland is beautiful, they aren't kidding. I started off at the back of the pack, but I Tour de France'd my way up towards the center, passing the slower people until I found a place where I could ride at a comfortable place without worrying about crashing into other people. The wind rushed by, and the sea crashed and rolled on my right, while cows and horses grazed in pastures with the safety of stone walls on my right. It was fantastic.

When I reached the cafe, I had a simple ham and cheese sandwich and a piece of carrot cake, along with a bottle of water. Amazing what exercise does to your appetite.

After lunch and a bit of time browsing the shops (unfortunately, I didn't have enough money to buy a famous Aran sweater), we walked up to the fort and the cliffs. So I took a bus to a boat, a boat to a bike, and a bike to a place where they said I had to get off and walk the rest of the way.

I know some of you are only here for the pictures, so I'll switch over to picture/caption mode. (Also, the library closes in two minutes, so I gotta hurry.) The bus ride on the way to the ferry. 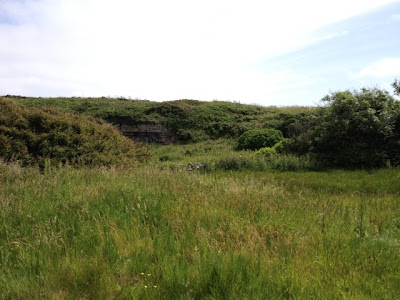 Walking from the visitor center to the fort. 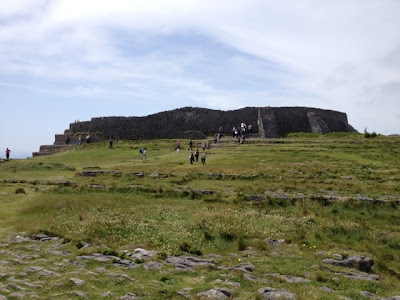 The fort! Super old. Like, this goes back to Viking times. And it's still there! 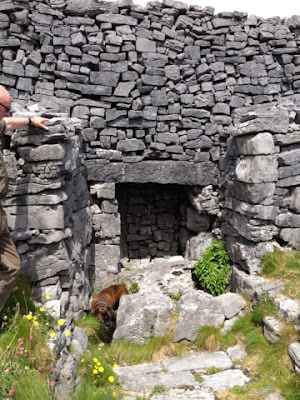 Thick stone walls, what used to be a door, and the tour guide's dog who pretty much owns the place. 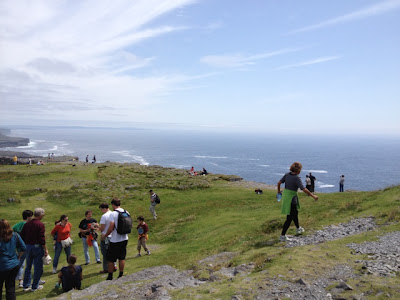 The land pretty much stops. Like, it's a complete drop-off. Notice that there are no walls or guard rails. 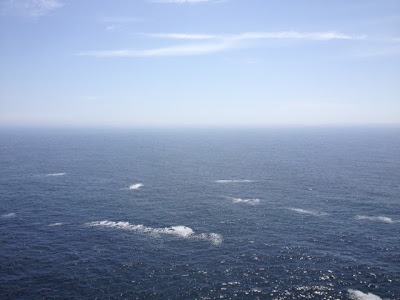 The view of the ocean was so beautiful. 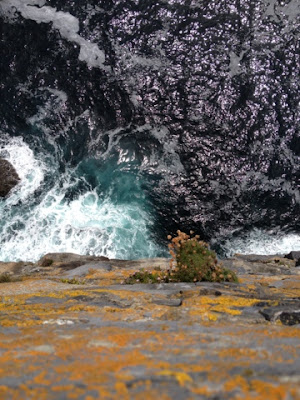 I got down and belly-crawled to the edge of the cliff. I took this picture while peeking over the edge (and praying I didn't drop my iPhone). It's about 160 feet down. We dropped a few rocks over the side, and someone estimated it took them about ten seconds to hit the water. It's kinda scary leaning over the edge like that... but completely worth it. 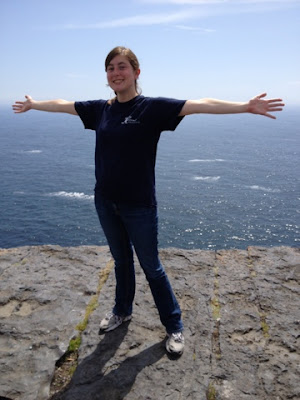 Here's me being all brave and standing close to the edge. 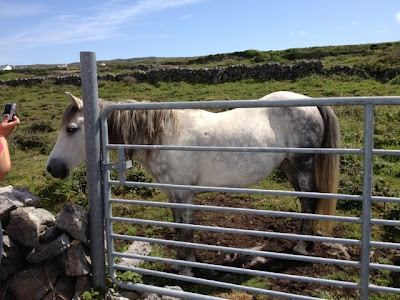 I went a little more slowly on the bike ride back to the ferry. I stopped to smell the roses and say hello to a few horses. I tried taking a few pictures while riding the bike, but 1) The pictures didn't come out well, and 2) That was probably the stupidest idea I've had in my entire life. 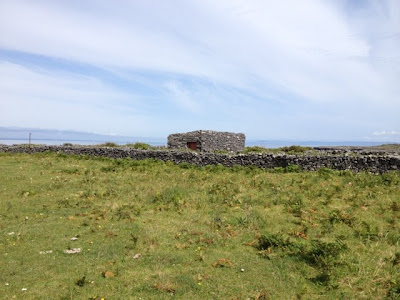 I got off the bike to take pictures. Unfortunately, I was tired out from my first bike ride, so the ride back to the ferry was a lot harder. It didn't help that it was uphill most of the way. I did pretty well, considering it had probably been at least a year since the last time I rode a bike. I only had to get off and walk the bike up one hill because it was Just Too Steep.

I bought a little ice cream before I got back on the ferry. Mint chocolate chip. Deelicious.

And after that the story gets boring. We went back home. The End.

Ahhh, but it was a really fun trip. Probably the most fun excursion of my entire time abroad. So, so, so much fun.

Thanks for tuning in! Over the next few days I'll try to make it back here and post about my excursion to the Dingle Peninsula and a few things I've noticed around the city of Galway! Can't do it today because the library's technically been closed for eleven minutes, but I'll do my best to post again tomorrow. I've got to hurry up with this blogging business, though, because I have less than two weeks left in Ireland! Aaah! But I just got here! It's not fair!

...what on earth am I going to blog about when I get back home?
Posted by Rebecca Mast at 2:14 PM