It's Monday. The weekend's over. You're downing the coffee and struggling to get through work or classes or band camp. The sky isn't blue-- it's precisely the shade of Monday Blah. You know what you need?

Some pictures of Ireland.

And I, your globetrotting blogger, am here to give you exactly that! I'm taking a break from my studying/paper writing/reading to finally upload my pictures of my excursion to the Dingle Peninsula. That's the weekend before this one that just ended. They're hard to mix up, you see. The Dingle weekend was really fun. This past weekend I didn't do much of anything fun.

Friday morning I threw some stuff in a backpack (packing a towel and shampoo, having learned from my previous stay at a hostel) and I walked to the university, where I got on a tour bus. Then we drove for a long time. I passed the time by sleeping, trying (and failing) to read Ulysses, and playing Angry Birds: Star Wars. I had just gotten the app because I follow Angry Birds on Facebook and saw the announcement that it was free last week. Woohoo!

We stopped for lunch at a sort of historical park where they had a castle. While most people went straight to the pub, some friends and I explored the park a little bit. 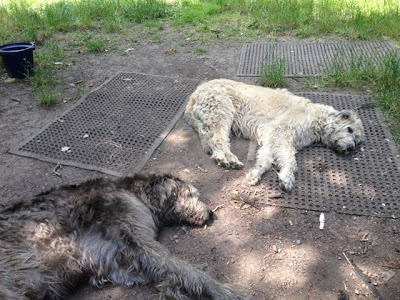 We saw some big, hairy dogs. 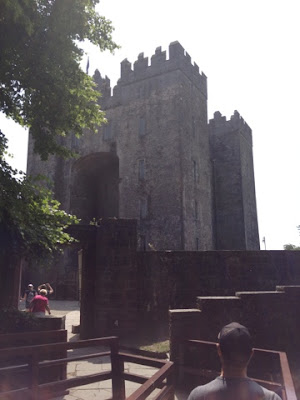 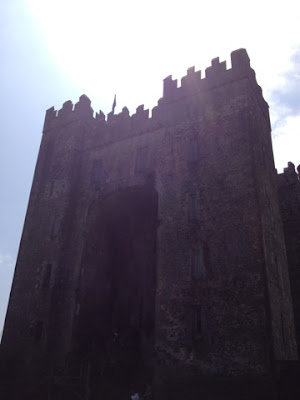 You can bet we climbed to the very top and reenacted that scene from Monty Python. 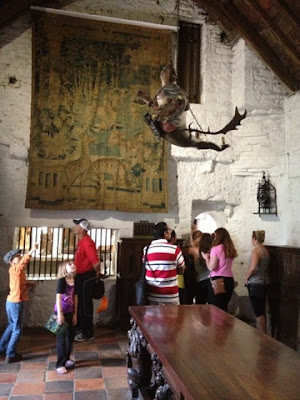 "I use antlers in all of my decorating!" 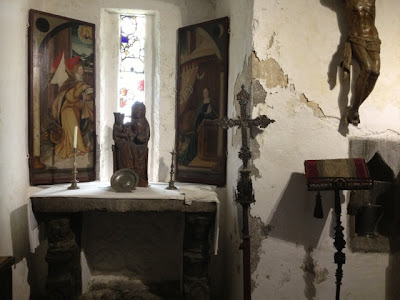 I believe this was a small chapel. 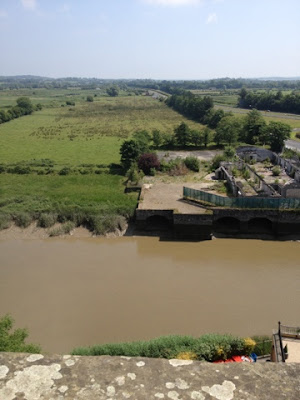 View from the top of the castle. For the record, the staircases in that place are awful. Skinny, spiral staircases with terrible handrails. We discussed how that was better for defense, since basically all you had to do was stand at the top of the staircase and poke all the people coming up with a long spear so they tumbled back down and took everyone with them.

The construction of the castle (and weird, antler-y art) set it apart from most of the castles I saw in France. Most of those castles had been bought by wealthy people and refurbished to look fancy or built later in history with style and bragging rights in mind instead of defense. They had a lot of big windows and aesthetically pleasing decorations.

This castle, on the other hand, was made for defense. The windows were small and the outside was plainer and brick-like, very solid. And you can't forget the aforementioned staircases. 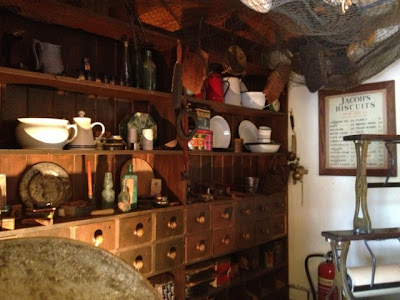 Decorations inside the pub 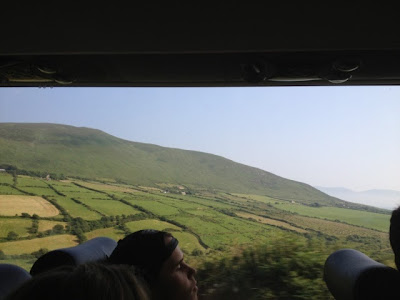 Pretty scenery through the bus window as we arrived in town.

We arrived at the hostel, which frankly seemed more like a hotel or bed and breakfast. They actually provided towels and shampoo, which made me a little grumpy. I ended up sharing a room with the three other girls in the group from my university, which was really nice considering they crammed fifteen girls into another room.

We had the rest of the evening to ourselves. We went to a seafood place, then Murphys Ice Cream, which is an ice cream parlor with a wall full of prestigious awards. I got a cone with one scoop of chocolate and one scoop of Bailey's flavored ice cream. The ice cream was good, but waaaaay too expensive to make a habit of it. I guess when you have a wall full of awards you can charge whatever you want for your ice cream. At any rate, it was really cool to actually go to an ice cream parlor. I've been to a ton of ice cream stores or shops in my life, but how often do you get to go to an ice cream parlor? After the ice cream, we went to a pub and listened to some traditional Irish music. That was pretty fun.

The next morning, we had to get up early for breakfast (which a lot of people skipped, but not me because I like free breakfasts) and to get back on the bus to tour around the Dingle Peninsula. 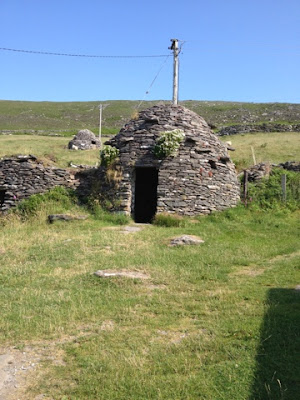 This is an early Christian hut, often associated with beehives. It's a little newer than some of the other ones we saw. You can tell because it has a roof. 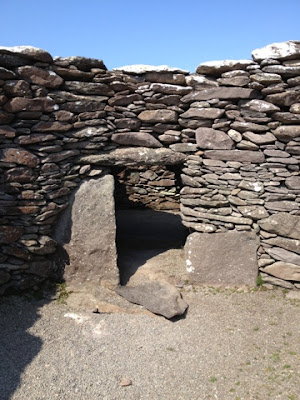 A slightly older beehive hut. This hut was constructed by stacking rocks on top of each other. There was no mortar or any other adhesive involved. The main room was built and then other rooms were added on. I'd like to see exactly how they created the doorways. It must have been like a massive and very dangerous game of Jenga... 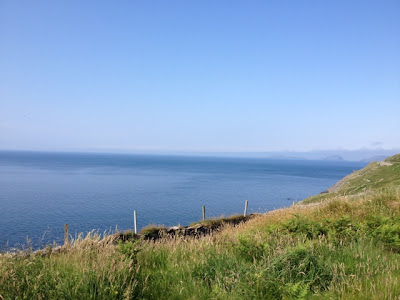 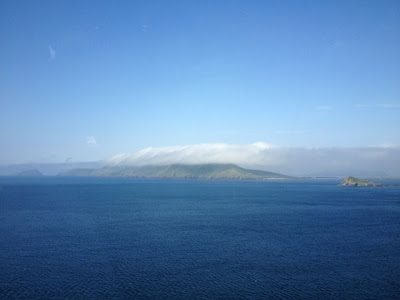 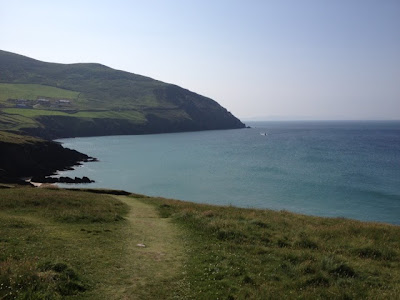 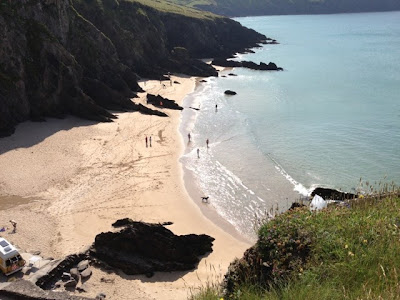 We went down to the beach. I took off my shoes and walked around in the sand and surf. It was a lot warmer that day than it was during my visit to the beach at Saint-Malo. 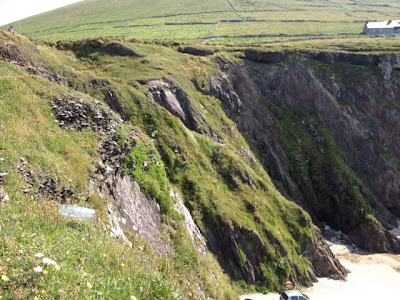 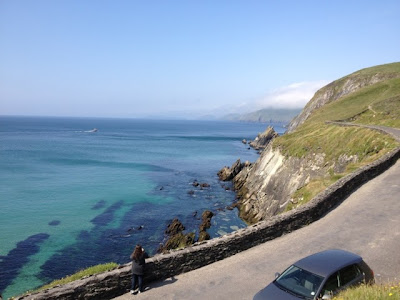 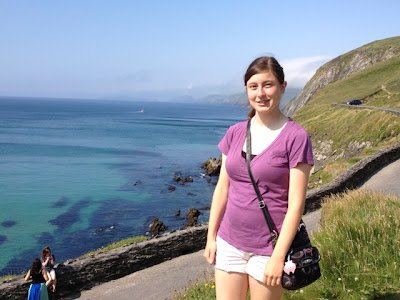 There's me! I definitely enjoyed the uncharacteristically warm and sunny weather.

That's the weird thing about this trip. The weather's never quite been right. It was cold and rainy in France, it's been warm and sunny in Ireland... Not that I'm complaining about nice weather, of course. 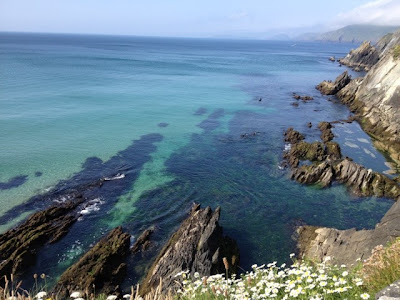 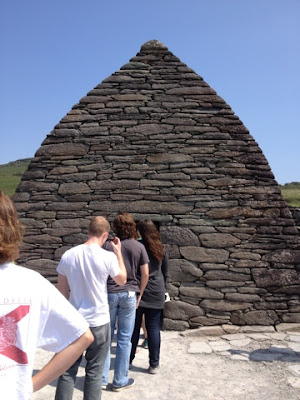 This is an early Christian church. Like the beehive huts, it was built by stacking rocks on top of each other, although I think some type of mortar might have been used here. After centuries and centuries it's still standing and largely waterproof. That's pretty impressive. 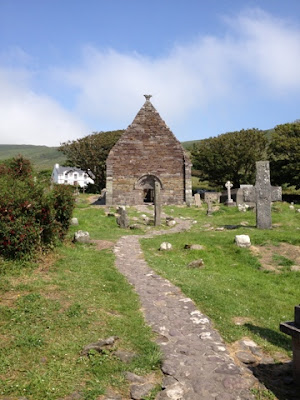 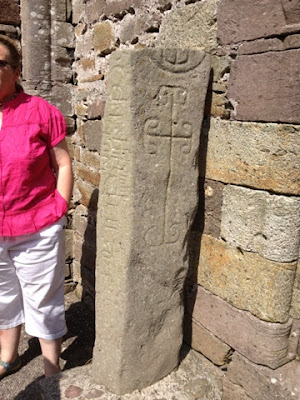 This stone has the Irish alphabet carved on it. 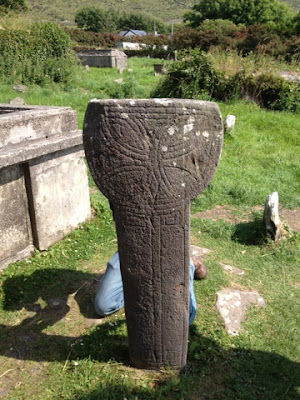 This stone is an old sun dial. Now it's positioned wrongly to tell the time, unfortunately. Since the typical weather in Ireland doesn't include much sun, this sun dial is a bit extravagant and implies that the monks out here had some wealth.

That was a very long day of sightseeing. Unfortunately, I had to go around with two tour buses' worth of people, most of whom couldn't care less about the historical artifacts or thousand-year-old buildings and just wanted to go back to the hostel so they could take a nap and then go out and drink all night. Disgraceful. I was ashamed to be with them. But I really enjoyed seeing the cool history and all the beautiful scenery. That's just not something you get to see every day, you know?

When we got back in town, we browsed around and did a little shopping. I bought a penny whistle from a music shop. It's sort of similar to a recorder. I can almost play Frere Jacques now. After hitting the shops, we went back to the hostel for a little down time. I tried (and failed) to read Ulysses. Then the majority of the group from my university went out to a nice restaurant. It was a little pricy, but the food was sublime. I had a really good food buzz going on, and everyone else seemed to be in a really good mood, too.

Afterward, we went to a bar and listened to some more traditional Irish music. We left that bar and ducked into another one because the band we had seen the night before was in there. They played a better show that night than they had the night before. They even played "The Rattlin' Bog," the song I learned in Dublin! An Irish guy tried to get me to go have a drink with him at another bar, but I was a little wary of leaving the group and, to be honest, I had a hard time understanding his really thick accent, so I had to decline. Still had a really fun night.

The next day we got up early, I ate my free breakfast, and then we all got on the bus to go home. I tried (and succeeded!) to read Ulysses. We stopped in Limerick for a lunch break. Everyone in the town was wearing a green jersey-- we found out that there was a big sporting match going on. I think it was hurling, and it was a quarterfinal or a semifinal match or something like that. A big deal. It reminded me of Saturdays on my campus during football season, when the whole world turns up wearing crimson and starts barbecuing stuff. It was a cool atmosphere.

I went that whole weekend without Internet, so it was kind of a relief when I got home and was able to talk to my parents, check Facebook, and do all that other stuff we people do in this day and age. It was a fun trip, though. Definitely glad we went.

Whew! There's the last of my big trips. I have one or two more blog posts planned, and I have, like, three days left in my country, so I'm going to be basically blogging at the speed of light. Time flies when someone keeps making you read Ulysses! It's actually a weird sort of flying-time situation. Time flies all around you, but it trudges by painfully slowly in the room in which you're trying to read. After thirty minutes you realize you're not even halfway done with the chapter and it becomes plainly obvious that you're never going to get caught up in time for class, and in the meantime students from other schools are walking by outside, on their way to town or the pubs, or playing Frisbee, or sitting in the sun, or laughing and chatting with their friends...

Thankfully, though, we English majors can make a good time out of reading Ulysses. Sometimes there's food and... beverages involved.

I bet right now you're wondering "Jeez! When is she going to wrap this post up? How long can she possibly ramble about every single thought that crosses her mind?!"

The answer: infinitely. But I won't. I guess I just didn't realize until now how much I missed blogging! There have been sooooo many obstacles, like Ulysses, class, papers, Angry Birds, restaurants, falling asleep, forgetting, laptop being out of operation...

Oh. For the record, I still haven't bought a new power adapter and I'm just not going to. At this point, it can wait until I get back home. Thank God for smartphones.

The rambling ends here, my friends. Thanks for reading.
Posted by Rebecca Mast at 5:39 AM