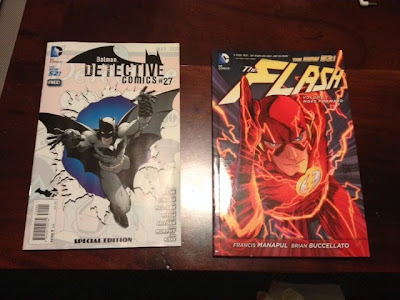 Today Barnes and Noble celebrated 75 years of Batman by giving out free comic books and other goodies. They're also having a drawing to win free action figures and such.

When I heard about the Batman festivities, I jumped into my car and drove down to Barnes and Noble lickety-split. I like superheroes, in case you couldn't tell from many other posts on this blog.

I didn't want to just take the free stuff and run, so I used a gift card to grab a Flash trade as well. I was a little hesitant about spending money on anything from DC Comics' New 52 since I've heard almost nothing but awful things about it, but a quick bit of research showed that Flash doesn't seem to be doing too badly. The cover doesn't offend me; in fact, it looks pretty cool.

But what do I know? I typically only read Marvel comics.

At any rate, I've never read a Flash comic before, so I won't know if this one is destroying all the comics that came before it.

I'm excited, you guys. I've only read Superman and a small bit of Batman. It's a new DC character for me! I've always liked Flash on the TV shows I've seen, so I have high hopes for this book being worth the money. I just need to finish reading Watchmen first.

Ah, but Batman... 75 years and you're still awesome! Where would the modern superhero be without you?

Happy Birthday to the Dark Knight!
Posted by Rebecca Mast at 9:41 PM