This summer, I'm interning with Virginia Living Magazine. But I'll be honest: I only work there two days a week. If you've been wondering what I do the other five days, here's a picture: 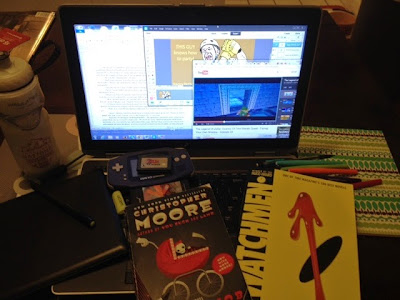 1. Microsoft Word document
I'm working on a story! I'd like to make it something I could release periodically in small parts, but it's taking me a while to get off the ground. I'm going to write a few chapters to make sure I have my head on straight. We'll see where it goes from there.

2. Photoshop Elements 12 window
I've been trying to learn a few Photoshop tricks. I have the software. It'd be nice if I could do more than just use the brush tool. I've actually been poking around in tutorials online. So far, I've only done one, but there are a few others I'd like to try. It's just a little disheartening when I attempt something and it looks nothing like the tutorial. Wouldn't it be nice if I could just download Photoshop skills into my brain? Ah, but then it wouldn't mean anything to me...

3. YouTube window
Okay, yeah, I kind of watch YouTube all the time. Way more than I should, in fact. But sometimes it's helpful for research. Today, for example, I looked up violin and guitar duets to see if they're actually a thing. It turns out they are, and they can be quite nice. That's a detail I needed for some character development. I'm also watching a Let's Play/walkthrough of The Legend of Zelda: Ocarina of Time. Because I'll never actually play it.

Another video site I frequent is ThatGuyWithTheGlasses.com, home of the Nostalgia Critic and all his friends. I really enjoy listening to other people analyze movies. It helps me look at old favorites from different angles, and it's really informative on how not to tell a story.

4. Water bottle
I've been drinking a TON of water ever since I arrived in Richmond. I'm just always thirsty. My personal theory is that we only eat multigrain, super-fibery food in this house and it makes me thirstier than usual.

6. Game Boy Advance
I wasn't super interested in the Nintendo DS when it came out, and now I'm too cheap to buy a 3DS, so I'm still playing on the Game Boy Advance I got for my tenth birthday. I've had it for over 11 years. I haven't had this particular game pak for that long, though. It's The Legend of Zelda: A Link to the Past, with the Four Swords game included. I actually bought it used from Amazon right before I left for Richmond.

Since I've been interested in the Legend of Zelda franchise lately, I really wanted to try playing one of the games. Thanks to my aforementioned cheapness, my options were limited to Game Boy Color, Game Boy Advance, and Wii games.

If you know the Zelda franchise, you might be saying something along the lines of, "Wait, what?! Why didn't you buy Twilight Princess or Skyward Sword? They're great games, and they're much more recent than A Link to the Past!"

Because my brief moments with the Wii are few and far between. I don't have it with me in Virginia. My hopes are not high for being able to take it to school with me in the fall. It was a family Christmas present one year, although I'm the only one who still uses it. Now that both my sister and I will be at school, maybe I'll be allowed to take it along? I mean, we have it. Somebody should use it. I'd really love to play Twilight Princess. And Skyward Sword, even though I've already watched the whole thing online. But I have to beat A Link to the Past, first, and it's a lot harder than you'd think it would be. Puzzles, man.

7. Christopher Moore's A Dirty Job
It's been a while since I've read a book that wasn't assigned to me by a professor. This one is pretty interesting so far! My aunt recommended it to me. So far, I find it funny and intriguing, even though it's about death. Can't wait to dig more into it. My aunt had a graphic novel that Christopher Moore wrote, which I also read, which was called The Griff. I wasn't so enthused about that one. The idea was solid and really very interesting, but the pacing was off. It was adapted from a screenplay version that Moore had written earlier, and you can really tell. The panels flash by and whip back and forth from location to location just like scenes in a movie might, but while that kind of pacing works for a movie, it's just too fast for a medium that tells its story in just a few panels. Moore seems much more at home writing a book, and I am definitely hooked. I just need to hurry up and finish it before it's time to leave.

8. Alan Moore and Dave Gibbons' Watchmen
A lot of friends have recommended this comic/graphic novel to me, so I thought I might as well read it. The guy at the comic book store had only good things to say about it, although he wanted to make it clear to me that the book was much better than the movie. I haven't seen the movie, but I've heard plenty of awful things about it. I haven't gotten too far into the book yet, but I'm really intrigued by it. The guy at the comic book shop said it best when he described it as "a deconstruction of superheroes." It's really a different look at superheroes, different from any of the bright and shining or dark and gritty figures you'll see beaming up at you from your usual Marvel and DC comic books.

9. Notebook, pencil, and marker pens
I bought the notebook in a pack of three at Target, just because I wanted something to write and doodle on. I bought those pens specifically because the editor at the magazine I intern with uses that kind. Hers is red and full of frightening power, though. I doodle, both for the sheer joy of putting ink on a piece of paper and in an attempt to learn to draw better. I've been using a few online tutorials for that, as well.

So that's what I do with my other five days of the week. I also go for long walks (and occasional runs), watch movies, cook and buy food, hang out with various friends, and sleep. I sleep a lot. Well, I don't really sleep a lot, but the specific hours I choose to sleep sometimes make it seem like I sleep a lot.

I do a lot of things. I'm engaged in so many different things that it's taking me forever to do any single one of them. I do one thing for a while, then I put it down and do some other things, and then a week or two later, I finally get back to the first thing. Too many things. I am spread too thin. But I'm really happy that I'm getting a chance to do some of the things that I don't get a chance to do during the school year, like reading a book for fun and playing video games. Vive summer!
Posted by Rebecca Mast at 9:15 PM