Over the last couple of days I've been blogging about the difficulties I've been having trying to make an advertisement for my French class. Here is the conclusion.

My problem was that I was trying to use my Wacom tablet and ArtRage Studio to do this project. ArtRage is a wonderful little bit of software and I love it, but it's really meant for drawing, I think. Perhaps some people have had better luck than I editing photos with it, but from now on I will use it only for drawing things from scratch.

(Unless I stumble upon an excellent tutorial that will show me how to use ArtRage Studio for editing photos. Anybody? There's a comments box...)

I love my Wacom tablet dearly, and I was very excited that I could use it for a school project. However, my insistence on using it led me to create a product that was much less professional than the one I had envisioned.

Also, I was trying to do it at 1 A.M. and I don't think I need to tell you how successful projects are at 1 A.M.

So today I happened to be in the library and have some free time because all my classes were cancelled (inclement weather, but that's another story) and I found an unoccupied computer in the Digital Production Area. It was a Mac and it had a really cool keyboard.

(Random note: I really prefer Windows over Mac, but I absolutely love the way Apple keyboards feel and look)

The cool keyboard was nice, but the important part of this computer was that it had Adobe InDesign installed on it. While I am not that great of an artist and am relatively new to ArtRage Studio, I have a lot more experience working with InDesign. We used InDesign to put together our literary magazine in high school (click here if you'd like to see it) and as I sat down and began to play with it, a lot of stuff came back to me. I even began to have FUN, which is the polar opposite of how this project was going on Monday night.

Why was it going so much better? Well, working on it during daylight hours helped, I'm sure. But InDesign is exactly the kind of software one should use when one is trying to make a one page advertisement. Yes, there are less expensive ways to do this, like PowerPoint and such, but I feel like stuff just looks shinier when you do it on InDesign. I dabbled around on Adobe Photoshop a little as well, trying to free my bottle of barbecue sauce from its prison of black. The crop job is a little messy, but honestly, it's not bad for someone who had to Google how to do it.

So this is what my advertisement looked like when I rage-quit and went to bed on Monday night: 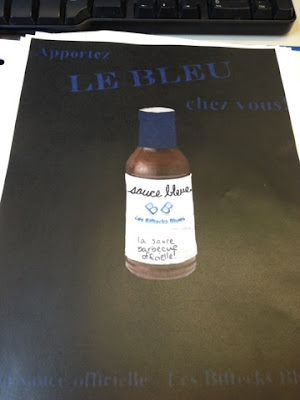 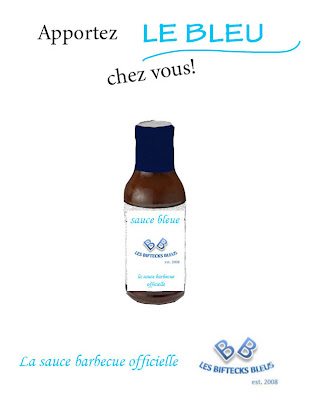 It's no professional job, that's for sure, and there's a lot of potential for someone to think I spent about five minutes on it (I SPENT AT LEAST AN HOUR ON IT, YOU JERKS), but I'm really happy with it. I even caught a spelling error in the logo and was able to fix it. I hope I get more opportunities to play with InDesign (or, you know, an editing internship) because I really, really like it.

As I should have explained earlier, "Apportez LE BLEU chez vous!" translates more or less to "Bring home THE BLUE!" "Les Biftecks Bleus" (The Blue Beefsteaks) is the name of the imaginary steakhouse/hamburger joint chain that my partner and I made up for our Commercial French class. It's a swanky place, y'all. The food isn't actually blue (that would be gross), but The Blue is the overall experience you have at the restaurant. We're now selling our signature barbecue sauce in grocery stores so that everyone can Bring Home THE BLUE! And now there's an ad for it.

And they all lived happily ever after. The End.
Posted by Rebecca Mast at 3:20 PM