This has been a rough week for me. And it's only Wednesday. But Tuesday afternoon while I was sitting in the library and trying to get some work done on a paper before dinner, I got a phone call from my dad. He told me that he'd sent me a package and that it had arrived at my school's package center. Since I was in the middle of a paper and I was pretty sure the package center wouldn't have even processed it yet (sometimes they're slow about that), I thanked my dad and told him I'd pick it up first thing in the morning.

Of course that package didn't distract me at all.

Twenty minutes later, I gathered up my stuff, left the library, and all but ran to the package center. It's nothing to sneeze at when your dad calls you to let you know he's bought you something, especially during dead week when all hope seems lost. "Yeah," the girl behind the desk said as she checked her computer. "It says you've got a book."

But what kind of book was it, I wondered? A novel? A textbook? A notebook? A comic book? I wondered all the way home, holding the cardboard box as if it were silver or gold. Something was sliding around in it just a little bit. The box was maybe an inch thick, not too heavy, roughly the length and width of a high school text book... What was it?

I finally got home, plunked myself down on my bedroom floor, and tore the box open.

The first thing I saw: "HOW TO DRAW COMICS."

My dad had gotten me this book: 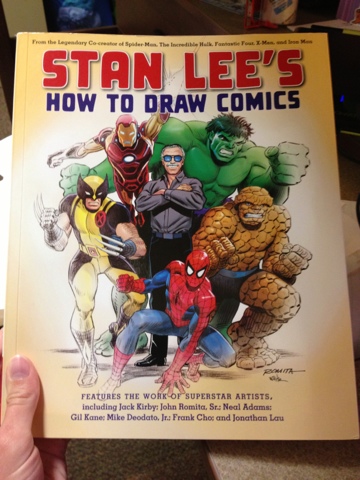 I absolutely love making little comics every now and then, as readers of this blog know, but I just don't have a whole lot of artistic skill. With this book, I can learn to draw comics THE STAN LEE WAY. And that, my friends, is a very good way. Stan is the MAN. I've never read a real comic book, but I know this to be true.

I was very distracted from my paper for about an hour afterward.

But luckily, today I turned in two papers and took a final exam, which means that things are going to be a little slower around here for a few days. I decided to use my newfound free time to try drawing some things. I made up a hero costume using a model the book provided, but it wasn't cool enough to post. I also drew a guy's head. 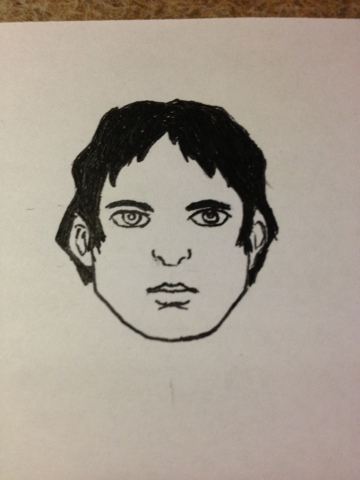 ...I'll get there eventually. I really like the left eye and the bottom lip.

So I'll be playing around with this for a while, especially as I make my poetry chapbook over the next few days (it's due Tuesday... yikes). I suspect it'll come in handy for the graphic novel class I'll be taking next fall. I'm really, really excited about this book! Thanks, Dad!