An Afternoon In Tours

I had a lovely afternoon in Tours yesterday! (And I would have blogged about it yesterday, too, if it weren't for that meddling Wi-Fi and its spotty connection...) After school let out, a few friends and I wandered off in a direction we hadn't taken before and we found a park. 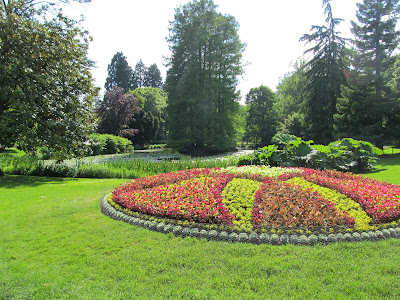 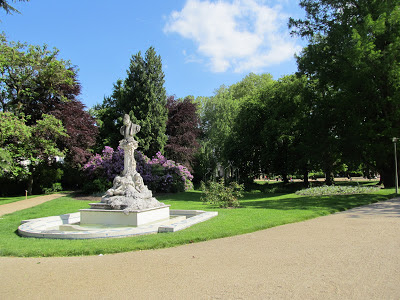 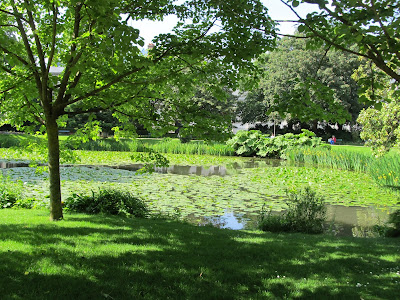 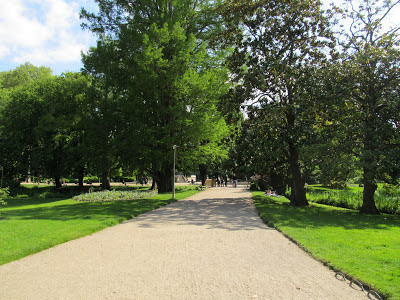 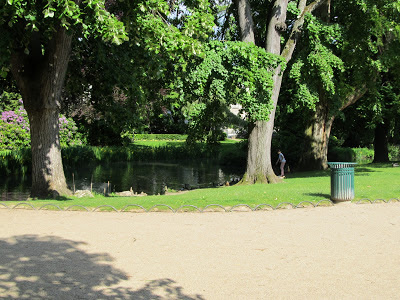 Beautiful, isn't it? I always think of the Madeline books when I see French parks like this.

After the park, we stopped at a grocery store, where I looked for a lint remover and did not find one. However, I did stock up on more Kinder chocolate. Man, I love that stuff. I think it's technically German, but I'm going to continue to eat it here in France and probably in Ireland, too, because it's amazing. Usually I buy the bars (more chocolate for your money) but yesterday I saw some packages of Kinder Surprise. When my family lived in Germany back in the day, these used to be a special treat. They're chocolate eggs with little toys inside and they're outlawed in the U.S. Why? I don't know... I guess we Americans can't handle food with toys inside? (But I saw on the Internet that you can buy knock-off brands in the U.S. now, so maybe we're making progress)

Anyway... Like I said, I usually buy the regular chocolate bars because they're a better deal if you just want to eat delicious chocolate, but these particular boxes of Kinder Surprise offered me Asterix and Obelix toys. How could I refuse? I studied Asterix and Obelix a bit in my various French classes, and while my experience with the comics and films is limited, I am quite fond of them. I caved in and bought the chocolate eggs.

At home, I unwrapped an egg and devoured the chocolate, then eagerly cracked open the yellow plastic container inside. Which toy would I get? Asterix? Obelix? But no- I had picked the egg with the surprise random toy in it. It was a weirdo blue alien with three prongs on its head. I was thoroughly disappointed until I realized that the prongs were little crayons.

But still... I would have to wait another day to open up an Asterix and Obelix toy... or would I? I was in France, after all, and more or less a grownup, so my parents couldn't scold me for my eating habits... And the eggs were hollow and not that big to begin with... Why couldn't I eat two chocolate eggs in one night?

And it was Obelix! I greatly approved of the toy, since I find Obelix to be a cool and amusing character. It looks like he's carrying a football (American) or rugby ball, which I don't understand because I haven't seen the film that these toys are promoting.

But then there was just one little egg left in the box all by its lonesome, with perhaps the most marvelous toy of all hidden beneath foil and chocolate...

Yes, okay, I ate that one, too. The toy was very unsatisfying, though. I had to do some serious research to figure out who the character was. As far as I can tell, her name is Ophelia and she's only in the newest film. Okay. 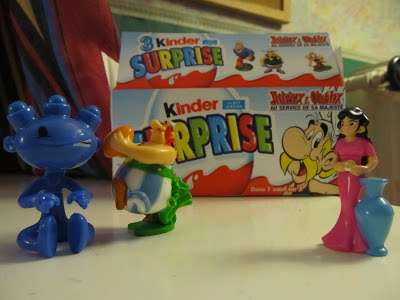 So I have some cool little doodads now! But I think I might have a problem with self-control. 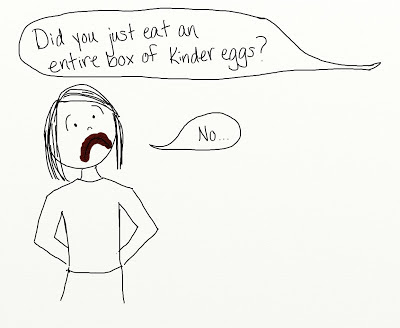