I'm not really partial to the Ravens. I'm not even really partial to pro football. I'm much more a fan of college football, but I do have an NFL team that I'll root for. Sadly, my team was knocked out of the running long ago. Oh well. I picked the Ravens because one of its players played for my school last year and I really like the name Baltimore. It just has a nice ring to it.

And they won! Yay!

I ate taquitos with queso and drank Arizona green tea during the game. I followed up with Ben & Jerry's Chocolate Fudge Brownie ice cream. During that period of time when the lights in the stadium went out, I shot at the walls of my dorm with my Nerf gun. Some of the darts are still stuck up there.

I enjoyed the commercials. I was disappointed that the showgirls got the Coke... I wanted the cowboys to win, but oh well. I tuned into the game late and apparently missed a very good Oreos commercial. I'll have to keep my eye out for it. Probably the commercial I enjoyed the most was the Iron Man 3 trailer that promised viewers an extended look. The extended look was the best part. I won't give it away for anyone who hasn't seen it, but you should definitely go look it up:

I wasn't sure if it was Robert Downey Jr. or Tony Stark... which is the beauty of RDJ and Tony Stark.

Halftime was pretty good! I wasn't really digging the sound quality, but I appreciated the song selection! Beyoncé was fabulous as she always is. I may or may not have danced embarrassingly during "Single Ladies."

All in all, quite an enjoyable game. Congratulations, Ravens! 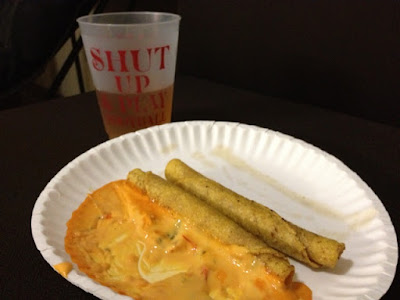