Tools of the Trade - Part 2 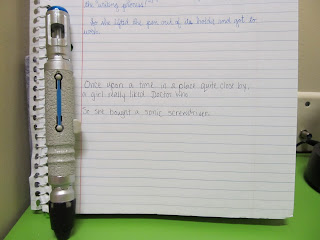 This is probably the most un-boring writing utensil I have.

I am an avid fan of the BBC show "Doctor Who," and when I found out you could actually buy a sonic screwdriver, I just had to have one. I got the Tenth Doctor's screwdriver because Ten is my favorite. I really like it! It lights up and buzzes like the Doctor's does on the show, and it extends, too. It's even functional in that it's a pen. It comes with two pen nibs: one that writes in black and one that writes in invisible ink. The sonic screwdriver's light can be used to reveal the writing.

I gotta be honest: I don't use this pen for writing very much. Usually I just run around my dorm and point it at light fixtures while I flick the light switches on and off.

So although my sonic screwdriver can't unlock doors or calibrate technology or put up cabinets, it is very authentic in that it doesn't work on wood. And it's awesome. 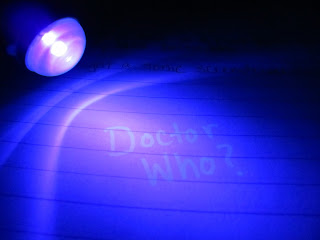