The Process of a Paper

I had a paper due on Friday. The topic was the way certain feminist authors handled the perceived relationship between gender and reason. The texts I worked with were "The Awakening" by Kate Chopin, "The Yellow Wall-Paper" by Charlotte Perkins Gilman, and "Trifles" by Susan Glaspell.

I did not like this paper at all. I wasn't overly fond of the texts and I wasn't completely confident in my analysis. None of the other topics appealed to me any more than this one did, though. Neither did most of the other texts that we've read so far in this class. I am most definitely not a fan of Modernist poetry.

Buuuuut I did the best I could. It was a process. Here's what my process looked like: 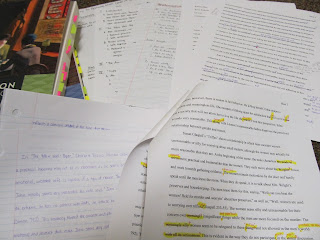 That's a lot of paper. 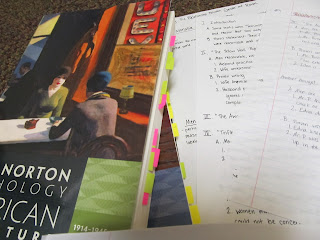 Reading the various works, underlining and marking the pertinent quotes with Post-Its, organizing the quotes into an outline. Usually when I write papers for my lit classes, I take a very long time making my outlines. I make them very organized and detailed, and the only thing left for me to do afterwards is to turn the outline into complete sentences. I skimped on the outline this time- and BOY, did I suffer for it. 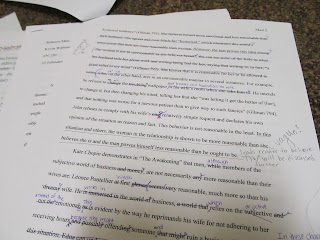 The first draft. My attention span is not good when it comes to making the first draft; I usually end up sitting at a computer for several hours while mentally whining and complaining. But it gets done. Eventually. My professor asked us to bring in two copies of our rough drafts for our classmates to workshop. I'd never had an analysis or close reading paper workshopped before. Usually I only do that kind of thing in creative writing classes. However, I found it very helpful- especially when my classmates suggested some different/better vocabulary. Yay English majors and their thesaurus brains!

After my professor and my classmates marked up my rough draft a bit, I went home and tore it to pieces. My professor had given me some very specific advice about things I needed to include- like, the kind of advice you don't turn down if you want a decent grade on a paper. So I took some things out and added in other things (we had a word limit/target). I was feeling rather benevolent that evening, so I made my edits in purple instead of my usual red. Editor!Me is vicious, especially when editing or revising my own work. 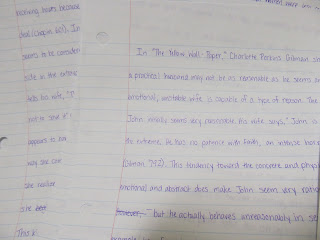 I moved so many things around and wrote so much completely new material that it became necessary to transcribe it all onto another sheet of paper. It was ridiculous. But that particular evening, I happened to be better at writing when I did it with a pen instead of my laptop, so it was all okay. Afterwards I transferred the changes onto my digital copy. Sometimes I'm more productive when I write things by hand and sometimes I'm more productive when I type. Not sure why. It just happens that way. 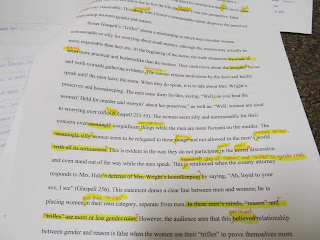 Another draft. I have never done so many drafts for one paper. But this one was less intensive than the previous one! It was unusual that I had to reorganize and rewrite so much of my first draft (probably happened because I didn't have a good outline), but this step is a normal part of my paper-writing process. Usually I end up writing the entire first draft the night before the paper's due (I don't recommend it), sleeping for a few hours, then getting up early and scribbling all over it with a red pen. That makes the paper better. I don't know how- it's magic! And then I transfer all the changes onto my digital copy. I highlight my red edits when I've fixed them on my computer so I can make sure I've fixed everything.

And that's how I write a paper! Ta-daaaa!

Although sometimes there's a lot of caffeine involved.
Posted by Rebecca Mast at 6:04 PM