One of my friends texted me today with some questions about what seemed to be a paper she was writing, and of course I dropped everything to discuss the difference between "affect" and "effect" with her and to describe the different ways those two words can be used.

"Affect" is a verb- if you "affect" something, you have an "effect" on it.

"Effect" is usually a noun. An "effect" is what happens when somebody "affects" something.

("effect" can also be a verb, like to start or to initiate, but this definition was irrelevant to our conversation and I hardly ever see it outside of the phrase "to effect change," so I'm not going into that here)

In the world of cause-and-effect, "affect" is the action someone takes- coincidentally, "affect" and "action" both start with the letter A. Another way to remember it is that somebody must "affect" something in order to have an "effect" on it, so in a way the word "affect" comes first, and A is the first letter of the alphabet.

Naturally, when I tried texting all this to my friend, she got majorly confused, because what the heck did I just say in all that? (and why am I so gleeful to be discussing grammar?) So I scribbled out a quick picture.

My friend is in the band with me, so she knows about our band director, who often requests that we "hustle" to our spots in between each run. He claims that, if we move quickly, we will positively affect the band. He always pronounces the word "affect" like "ay-fect," with a long A sound, emphasizing that the word he is saying starts with the letter A.

So I drew this cartoon: 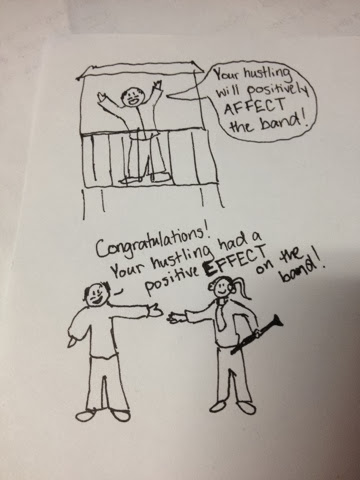 It's sort of a before-and-after thing. Before the band was positively impacted, the clarinet player had to hustle. By hustling, she affected the band. After she hustled, she could see the positive effect that her hustling had on the band.

I actually think about grammar like this a lot.
Posted by Rebecca Mast at 2:29 AM