I made five Shakespeare memes for a bit of extra credit in my Shakespeare class. Here they are, with just a bit of explanation! Slight spoilers ahead. 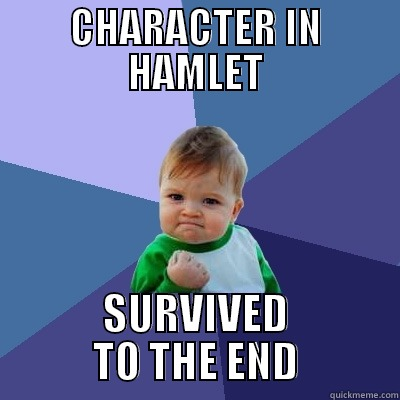 SPOILERS SPOILERS SPOILERS SPOI- well, if you know anything about Shakespeare and/or tragedy, then the fact that people die in Hamlet is probably not news to you. But the last scene of Hamlet is especially bloody. There are only a few characters (I mean characters important enough to have names) left alive onstage at the end because everyone else has died in various ways, and someone comes in to let everyone know that two other characters died offstage. So surviving Hamlet is pretty impressive. I was thinking mostly of Hamlet's friend Horatio when I made the meme.

Yo Dawg Shakespeare (The Taming of the Shrew) 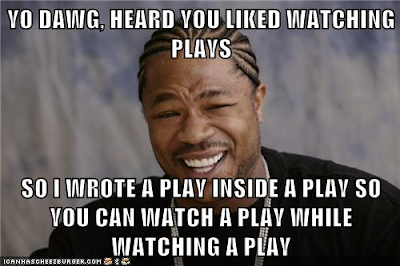 The Taming of the Shrew is set up with a frame story- a noble finds a commoner passed out drunk and decides it would be great fun to take him back to his home and convince him that he's a noble when he wakes up. They bring in some actors to entertain the "noble," and the play that they perform for him is the main action of The Taming of the Shrew.

Challenge Accepted Petruccio (The Taming of the Shrew) 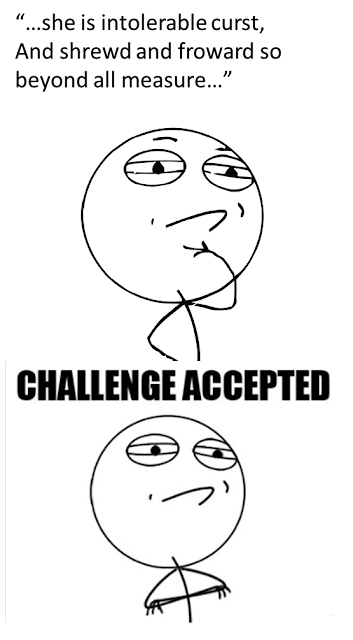 In The Taming of the Shrew, a bunch of men want to court a young lady named Bianca. However, Bianca's father refuses to let anyone court her until her older sister Katherine is married. The problem is that Katherine is a shrew- she's argumentative and hard to get along with, she doesn't behave like a proper young woman should, and no man is able to woo her. Desperate to court Bianca, Hortensio asks Petruccio to woo and marry Katherine, mentioning that there's a considerable amount of money involved. Petruccio's response? "Challenge accepted." 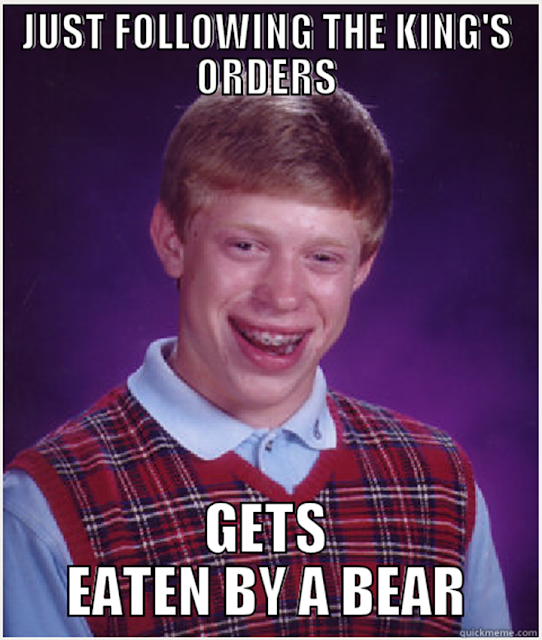 In The Winter's Tale, King Leontes completely flips out because he thinks his wife and his best friend, who is a king of another land, are having an affair and that his newborn daughter isn't really his. Therefore he forces Antigonus to take the baby out to the woods and abandon her there. Antigonus doesn't have much of a choice, so he follows orders. But no sooner does he put the baby down than he spies his own personal doom and we get one of the most famous stage directions in all of Shakespeare: "Exit, pursued by a bear." 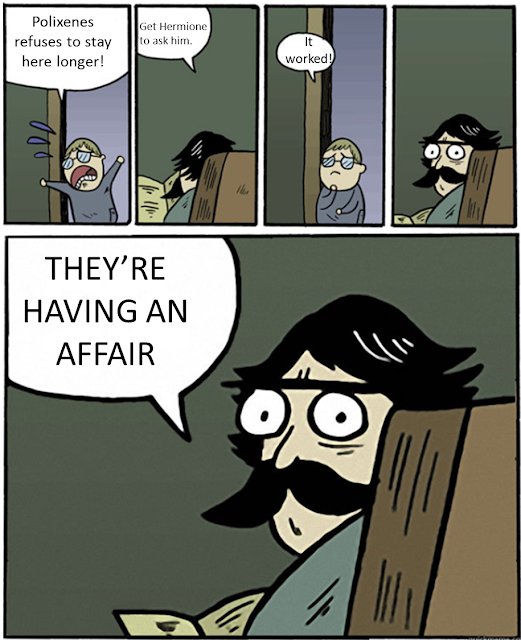 The aforementioned King Leontes just wants his buddy King Polixenes to stay with him for a bit longer, but Polixenes has been away from home for nine months and is determined to go. Leontes asks his wife Hermione to convince Polixenes to stay, and when she does, he agrees to stay a bit longer. Because Hermione did exactly what he told her to do (gasp!) and Polixenes finally broke down and agreed to stay (scandal!), Leontes jumps to the entirely logical conclusion that Polixenes and Hermione are having an affair.