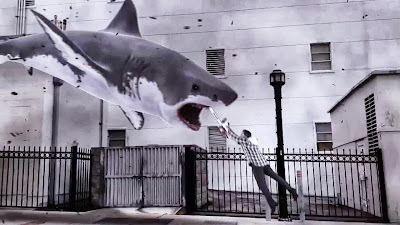 (edit: this image courtesy of my dad, who occasionally likes to sneak in and do things to my blog when I'm not looking. I can only assume it came from Google Images)

If you haven't seen it, you should sometime, especially if you can see it for free or watch it on Netflix. I hesitate to recommend that you pay a whole lot to watch it, because it really is a terrible movie, but it's terrible in that it's funny, like a bad horror movie.

Like, seriously. The premise is that sharks are flying through the air. You know nothing good can come of that.

But if you haven't seen it, know that there will be spoilers (SPOOOOIIIIILLLLEEEERRRSSSS!!!!) ahead.

Honestly... What can I say about Sharknado that hasn't already been said? There is site after site on the Internet that lists all its flaws. The goofs section on its IMDb page is stuffed with notes.

A guy gets swallowed whole by a shark that fell out of the sky conveniently right on top of him. But it's okay- he was holding a chainsaw at the time, so he was able to cut his way out. But wait, there's more! While he was in the shark, he found his friend who had just recently fallen out of a helicopter and been swallowed up by the same shark! And she was still alive! What luck!

Yeah, it's just ridiculous, and I laughed at a lot of things. But there's really not a lot for me to say that hasn't already been said by just about everyone else, so I'll spare you the repetition and just hit a few points.

Do they get points for creativity?

Ahhh... Hmm. I think that you really have to draw the line somewhere between creativity and complete, utter, total implausibility.

For example, you'd have to have a really good explanation as to how a shark could survive being in a tornado for as long as those sharks did. Especially since sharks need to be under water, and you can't be under water in a tornado. So... they need a bit more creativity.

The writing was more than a bit flawed. My dad and I discussed how they must have had a checklist of tropes and crossed them off one by one (here's the TV Tropes page so you can decide for yourself: http://tvtropes.org/pmwiki/pmwiki.php/Film/Sharknado). Some moments were very awkward, forced. But I'm not sure it's really worth talking about the writing when we have sharks falling out of the sky and seemingly targeting people as they fall to their death. And sharks that just happen to snap at helicopters while they're twisting around in a tornado.

The acting was fine, I guess, considering what the actors had to work with. Nothing really memorable. The drunk guy in the beginning wasn't bad. We kinda went back and forth on whether he would survive to the end. At first we thought he was going to die just because he seemed inept and stupid, but then we thought he was going to be the token funny guy. It kinda surprised us when he actually did die pretty quickly.

But the most ridiculous idea this movie came up with (and yes, I'm going to say this even more ludicrous than a tornado full of live, attacking sharks) is that you can stop a tornado by throwing a bomb into it.

I live in an area that experiences tornadoes quite frequently. I'm not an expert on tornadoes, but I know that you can't defuse them with a bomb. It just doesn't work that way. Frankly, it's a bit insulting that the movie is basically saying, "Hey, people, why are you letting all your homes get destroyed and all your neighbors get killed? Don't you know that you can just make a tornado disappear by throwing a bomb into it?"

And you know the worst part? Some yahoo is probably going to try it now.

Aside from the tornado idiocy, it really is kind of enjoyable to watch the movie just because of how bad it is. I would definitely recommend watching it, although I would never actually buy a copy of it. I can't wait for the RiffTrax guys to get their hands on it.

And there's going to be a sequel! What joy!
Posted by Rebecca Mast at 9:54 PM