Just a Little Bit of Art

Last night, I wanted to illustrate my newfound journalism and office worker prowess with a little cartoon. So I pulled out the old Bamboo tablet and opened up Photoshop Elements.

I must have been really tired, because I screwed stuff up from the very start.

First off, I sketched and sketched and finally managed to get a really nice circle-plus-chin going for my cartoon head. Then I realized that my head was in the wrong position for the cartoon I wanted to draw. So I started over on a new file.

On my second try, I created another layer to go on top of my background layer. When I draw cartoons, I like to draw the outline on the topmost layer and then do the coloring on the background layer (or at least one lower than the top). With most programs, I can color over the lines a little bit and it won't show because the color is actually under the line art.

So I sketched out the outline of the cartoon, making rough eyes, a rough nose, rough shoulders, all that jazz. And I was really happy with the way it was going.

Until I realized that I was drawing everything on the background layer instead of on the top layer where I wanted it.

So I reasoned that, since I needed to trace a definite outline over my sketches anyway, I would just do the tracing on the top layer and then erase everything on the background layer, leaving myself with nice, neat line art on the top layer. Smart, huh?

So I resolved to do that. I changed from the pencil tool to the paint tool and began to trace over my sketches, sorting out which lines would become permanent and which would get swept away. And I was really happy with how it was going.

Until I realized that I was still drawing on the background layer.

That particular failure meant that I had a lot of work ahead of me-- using a very small point eraser to erase away all the sketchy marks without erasing the final paint lines. It took a very long time. I had to zoom in and squint at the screen. I had to make teeny-tiny movements with the stylus. I had to use the undo function a lot. And there was no room to cheat because I had done all my sketching in a bright blue color that the paint wouldn't cover up, even when it was a layer higher.

That project is still not done. My hand started cramping and I lost my patience. I will go back to it, but it wasn't going to get done last night, and I just couldn't bring myself to work on it today.

So instead, I did a little traditional drawing. I didn't bring a lot of art supplies with me to Virginia, but I did grab a few new notebooks from Target the other day, and I've got the pencil case I use at school. So I did a little doodle! I wasn't going to spend as long as I did on it. In fact, I was going to just sketch a little bit and then go to bed. But then the picture happened, and I didn't go to bed.

Here it is, presented in two different versions: 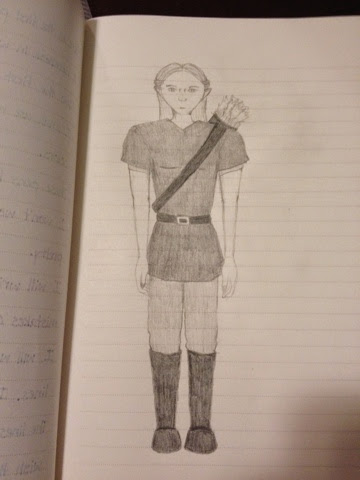 The lighting in this version is the best, although the camera angle is not great (my scanner access is a bit limited at this late hour). I've had fantasy on the mind lately, so I drew an elf. Obviously I haven't gotten much better at drawing since the last time I've posted art, and I'm still working on proper proportions and oh-my-goodness-those-stupid-hands, but it's not too terrible. 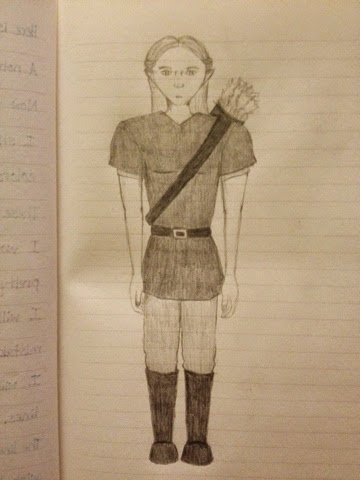 The lighting in this version is worse, but it's a much better camera angle. I usually find that I can make things look more realistic (or at least more serious) if I draw and shade it with a pencil instead of inking it and coloring it. This is going to smudge in my notebook like no one's business, but the fresh, clean version is on the Internet now, and the Internet lasts forever.

And just because... Here's a picture of a cool bird I saw out the window today: 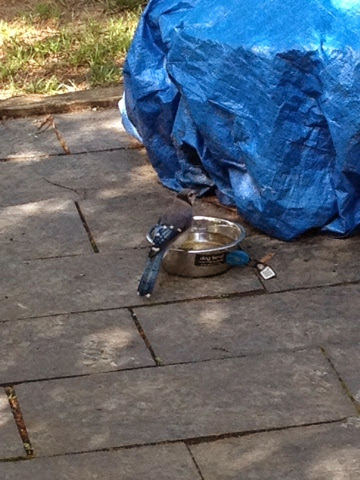 There were about three of those hanging out in the backyard. I have no idea what kind of bird it is. I just think it looks cool.
Posted by Rebecca Mast at 1:39 AM